Can the future affect the past? 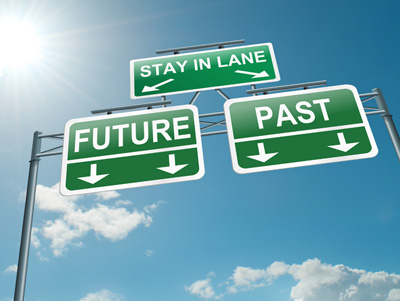 What you do today could affect what happened yesterday – that is the bizarre conclusion of a thought experiment in quantum physics described in a preprint article by Yakir Aharonov of Tel-Aviv University in Israel and colleagues.

It sounds impossible, indeed as though it is violating one of science's most cherished principles – causality – but the researchers say that the rules of the quantum world conspire to preserve causality by "hiding" the influence of future choices until those choices have actually been made.

At the heart of the idea is the quantum phenomenon of "nonlocality", in which two or more particles exist in interrelated or "entangled" states that remain undetermined until a measurement is made on one of them. Once the measurement takes place, the state of the other particle is instantly fixed too, no matter how far away it is. Albert Einstein first pointed out this instantaneous "action at a distance" in 1935, when he argued that it meant quantum theory must be incomplete. Modern experiments have confirmed that this instantaneous action is, in fact, real, and it now holds the key to practical quantum technologies such as quantum computing and cryptography.

Aharonov and his co-workers describe an experiment for a large group of entangled particles. They argue that, under certain conditions, the experimenter's choice of a measurement of the states of the particles can be shown to affect the states that the particles were in at an earlier time, when a very loose measurement was made. In effect, the earlier "weak" measurement anticipates the choice made in the later "strong" measurement.

4D rather than 3D

The work builds on a way of thinking about entanglement called "two-state vector formalism" (TSVF), which was proposed by Aharonov three decades ago. TSVF considers the correlations between particles in 4D space–time rather than 3D space. "In three dimensions it looks like some miraculous influence between two distant particles," says Aharonov's colleague Avshalom Elitzur of the Weizmann Institute of Science in Rehovot, Israel. "In space–time as a whole, it is a continuous interaction extending between past and future events."

Aharonov and team have now discovered a remarkable implication of TSVF that bears on the question of what the state of a particle is between two measurements – a quantum version of Einstein's famous conundrum of how we can be sure the Moon is there without looking at it. How can you find out about the particles without measuring them? TSVF shows that it is possible to get at the intermediate information – by making sufficiently "weak" measurements on a bunch of entangled particles prepared in the same way and calculating a statistical average.

The theory of weak measurement – first proposed and developed by Aharonov and his group in 1988 – dictates that it is possible to "gently" or "weakly" measure a quantum system and to gain some information about one property (say, position) without appreciably disturbing the complementary property (momentum) and therefore the future evolution of the system. Though the amount of information obtained for each measurement is tiny, an average of multiple measurements gives an accurate estimation of the measurement of the property without distorting its final value.

Each weak measurement can tell you something about the probabilities of different states (spin value up or down, say) – albeit with a lot of error – without actually collapsing the particles into definite states, as would happen with a strong measurement. "A weak measurement both changes the measured state and informs you about the resulting localized state," says Elitzur. "But it does both jobs very loosely, and the change it inflicts on the system is weaker than the information it gives you."

As a result, Elitzur explains, "every single weak measurement in itself tells you nearly nothing. The measurements provide reliable outcomes only after you sum them all up. Then the errors cancel out and you can extract some information about the ensemble as a whole."In the researchers' thought experiment, the results of these weak measurements agree with those of later strong measurements, in which the experimenter chooses freely which spin orientation to measure – even though the particles' states are still undetermined after the weak measurements. What this means, explains Elitzur, is that within TSVF "a particle between two measurements possesses the two states indicated by both of them, past and future".

The catch is that, only by adding subsequent information from the strong measurements can one reveal what the weak measurements were "really" saying. The information was already there – but encrypted and only exposed in retrospect. So causality is preserved, even if not exactly as we normally know it. Why there is this censorship is not clear, except from an almost metaphysical perspective. "Nature is known to be fussy about never appearing inconsistent," says Elitzur. "So it is not going to appreciate overt backward causality – people killing their grandfathers and so on."

Elitzur says that some specialists in quantum optics have expressed interest in conducting the experiment in the laboratory, which he thinks should be no more difficult than previous studies of entanglement.

Charles Bennett of IBM’s T J Watson Research Center in Yorktown Heights, New York, who is a specialist in quantum-information theory, is not convinced. He sees TSVF as only one way of looking at the results, and believes that the findings can be interpreted without any apparent "backward causation", so that the authors are erecting a straw man. "To make their straw man seem stronger, they use language that obscures the crucial difference between communication and correlation," he says. He adds that it is like an experiment in quantum cryptography in which the sender sends the receiver the decryption key before sending (or even deciding on) the message, and then claims that the key is somehow an "anticipation" of the message.

However, Aharonov and colleagues suspect that their findings might even have implications for free will. "Our group remains somewhat divided on these philosophical questions," says Elitzur. Aharonov's view, he says, "is somewhat Talmudic: everything you're going to do is already known to God, but you still have the choice."