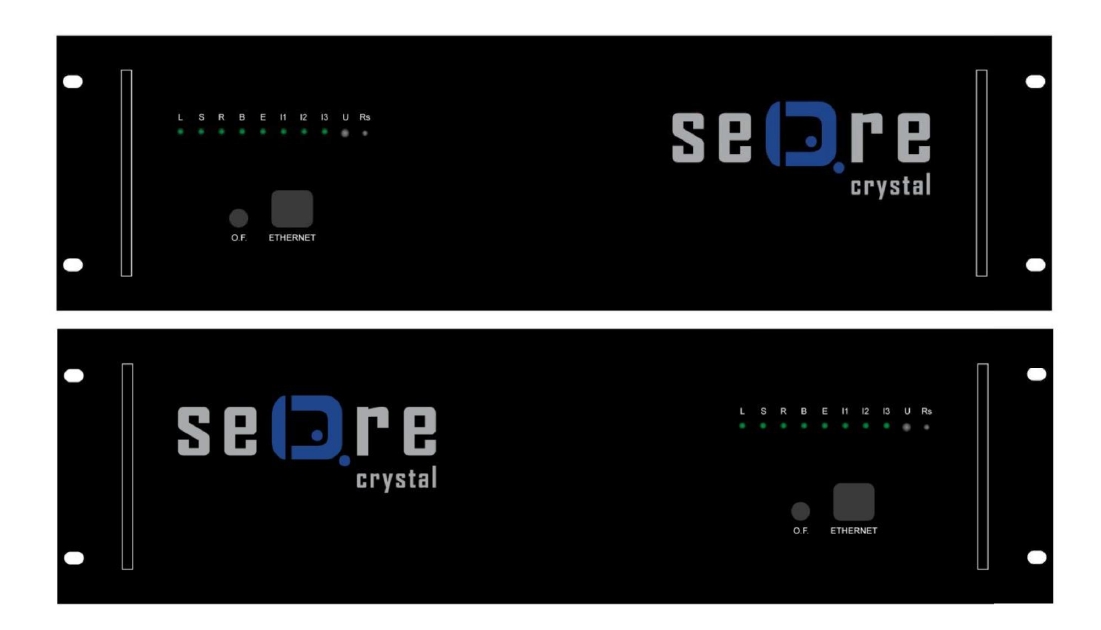 One of the seQre QKD systems deployed in standardized network server rack architecture: 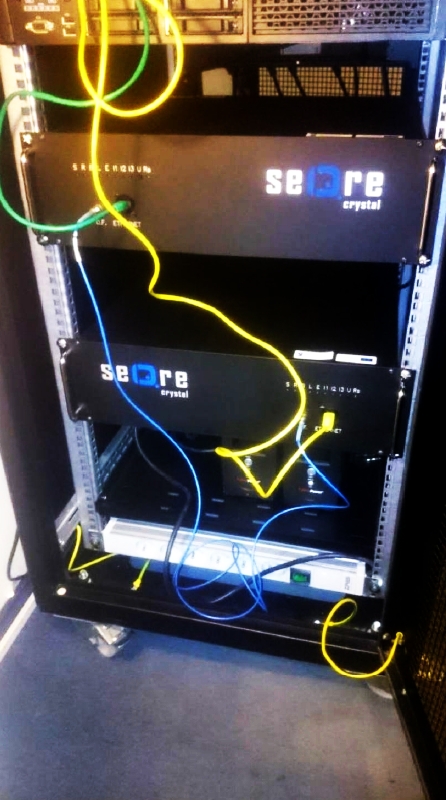 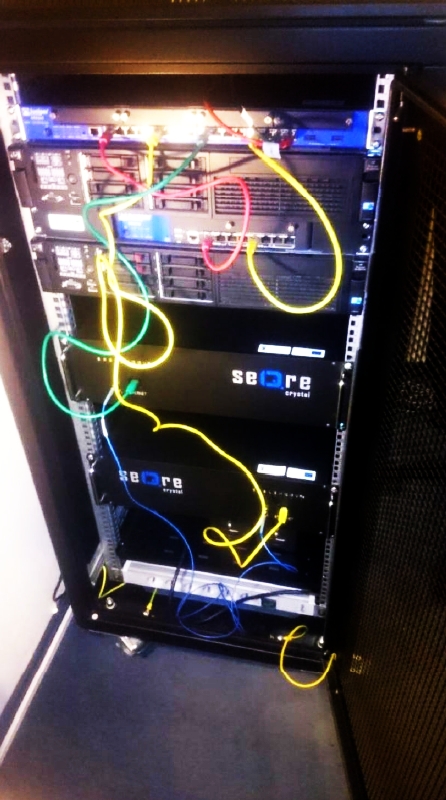 Front-view of the seQre QKD systems in a server rack: 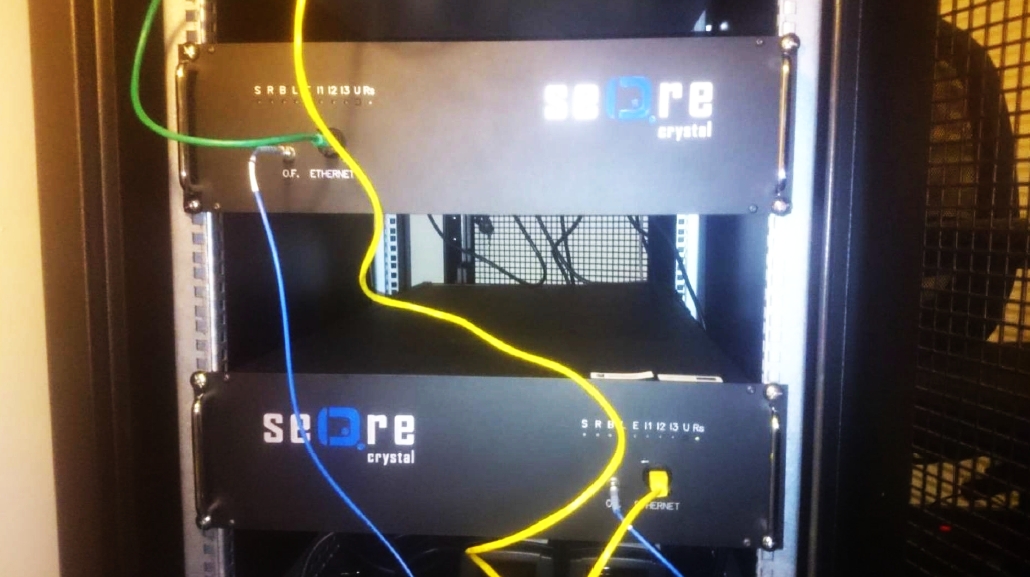 One of the important business-cases for QKD is securing ATMs and their networks against the so called skimming attacks. More details on this application can be found in a corresponding commercial information brochure: 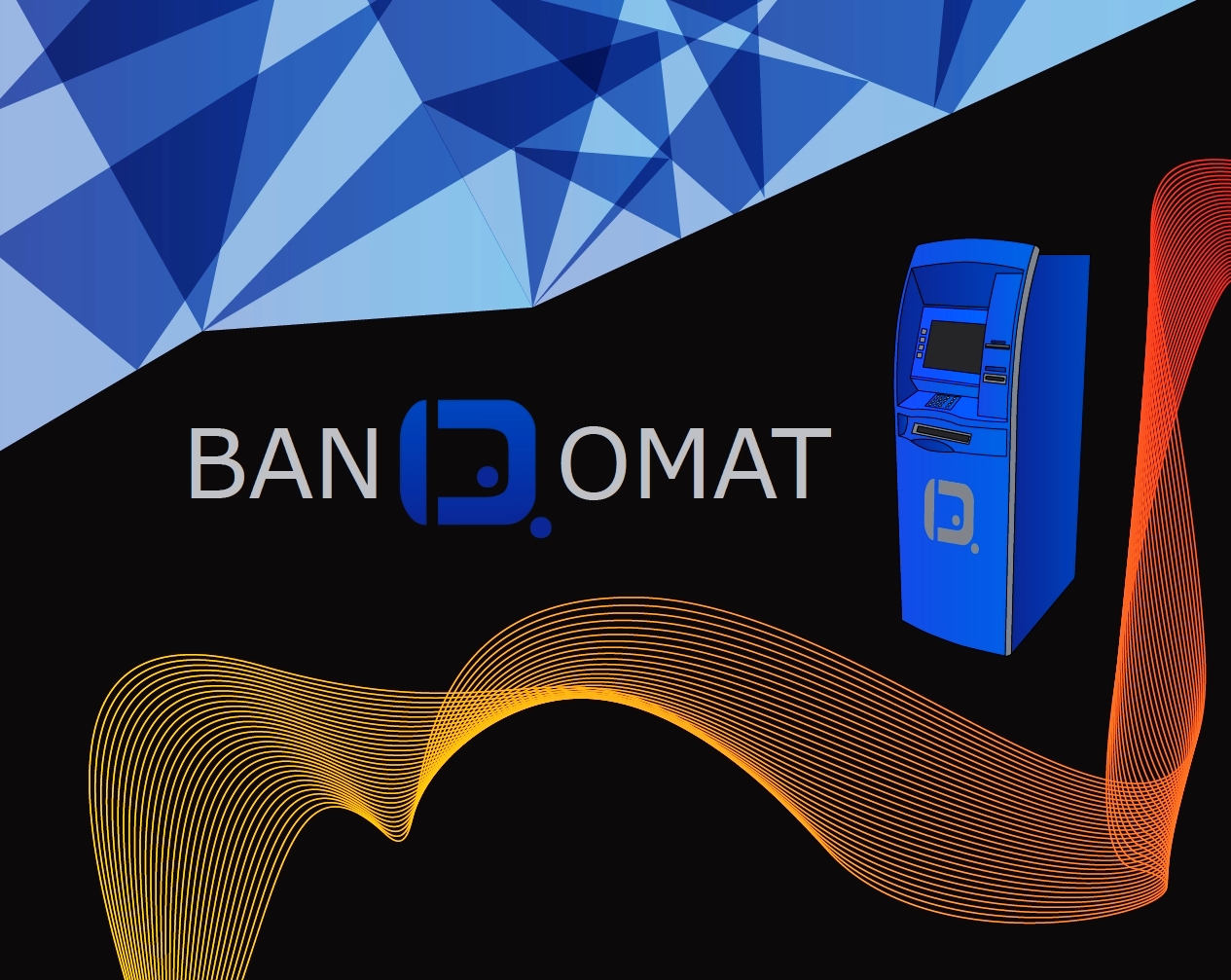 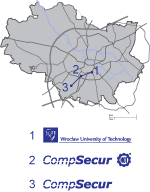 The optical infrastructure is determined by the city telecommunication canalization layout. Dark fibers connecting two, even not very distant metropolitan locations physically sharing an industry-standard telecom line with many parallel fibers (constituting the initial P2P topology and medium for QKD network) are divided in a series of thermally welded interconnections and junctions at telecom canalization crossings, which are main reason for decoherence and quantum signal losses, resulting with increased QBER and with infeasibility of key distribution in practical scenarios (this is specifically addressed to dark fiber infrastructure of metropolitan backbone telecom networks with multiple interconnections of telecommunication optical lines, which are implemented by thermal weldings – a connection between two locations separated by ca. 4-5 km distance, is usually divided by even several fiber weldings).

Research on QKD prototypes deployment in practical telecommunication network environments resulted in evaluation of boundary conditions for QKD feasibility versus quantum channel and transmission parameters and a successful resolution of channel quality problem by proper alignment of experimental QKD setups. The fiber optics line of the SMF28 standard has been used to test different connection and welding configurations for two QKD prototype approaches based no-entanglement protocols (encoding qubits on interfering phase shifts of laser impulses in Mach-Zehnder interferometers) and the entanglement protocols (encoding qubits on polarizations of entangled photon pairs generated in non-linear PDC process in a BBO crystal).

The main optics fiber line (single mode SMF28 standard) has been subsequently modified in laboratory test runs by welded or interconnected F3000/APC and FC/PC adapters. The interconnectors resulted with high QBER increases, thus favoring thermal welding which in proper proximity distribution were characterized by ca. 10 times lower loss induction than interconnectors (ca. 0.01 dB per welding, depending on the proximities). Next the industry standard telecom fiber optics line tests have been carried out towards welding and interconnections configuration optimizing in regard to QBER and conditioning of the metropolitan network deployment.

Primary focus was directed towards the non-entanglement based setup which turned out to be operating properly with an acceptable raw key exchange rate (RKER) generating targeted amount of distilled secret bits (DSB) under laboratory simulation of real optic fiber backbone metropolitan network configuration with required optimization of interconnections and welding infrastructure. The entanglement based QKD prototype has been tested for the first time in a real telecom network environment and proved to be also feasible but within a very narrow gap of optical elements alignment and poor values of QBER and RKER with high additional instability of operation parameters, which require further components development (especially in compensation of optical alignment). Learn more on Wrocław QKD Network.

Stemming from Consortium for Monitoring of Quantum Cryptography R&D established at the SEQRE 2014 Symposium - https://seqre.net/seqre2014 - the Quantum Standards Group (QSG) hosted by EITCI Institute joins international experts in relevant fields who are interested in quantum technologies standards development, adoption and dissemination. The support of quantum standards specifications in areas such as QKD, QRNG, QC will lead to a faster creation and adoption of such standards by international Standards Developing Organizations leading to a faster uptake of the quantum technology.

The group promotes cooperation in relevant workgroups towards implementation of R&D projects, technological development and deployments focused on defining, supporting and disseminating quantum technology standards. The EITCI QSG activity supports the Quantum Flagship initiative and is a part of the StandICT project of the European Commission Horizon 2020 program.

The list of Members of the EITCI QSG group was last updated on 22nd November 2019. The up-to-date listing of the Members can be found at EITCI QSG LinkedIn Group. 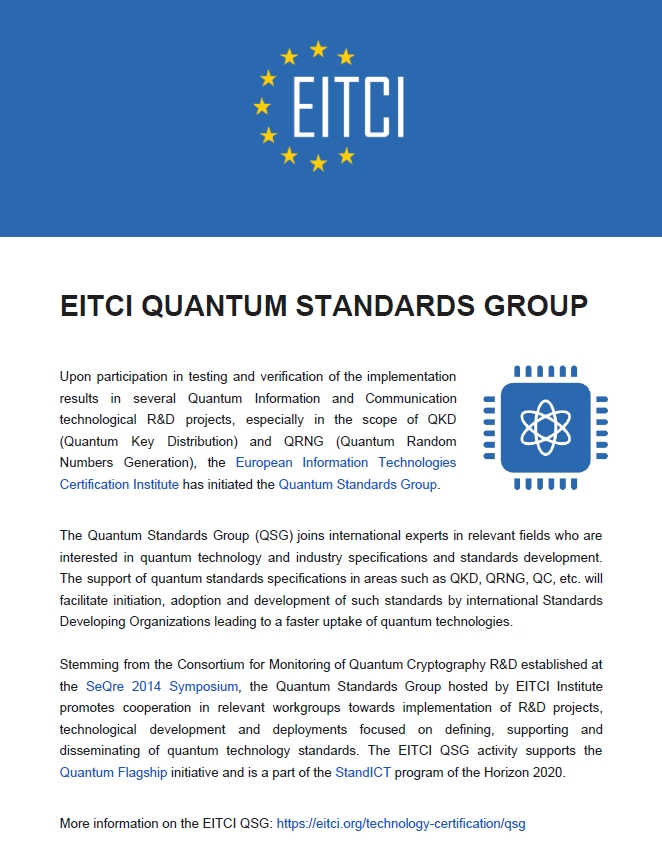 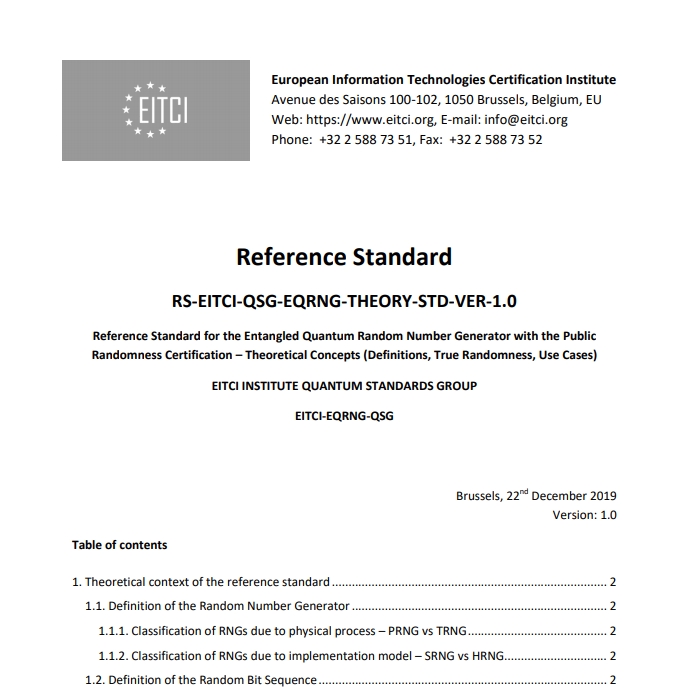 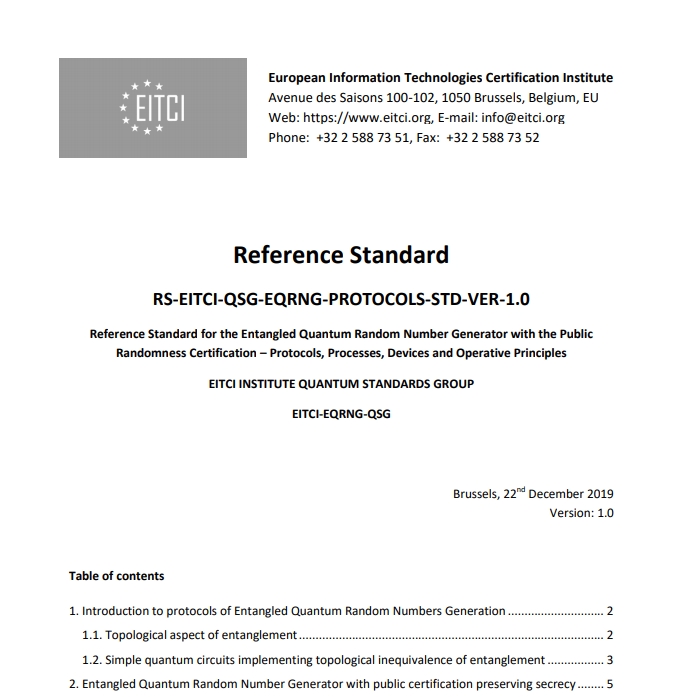 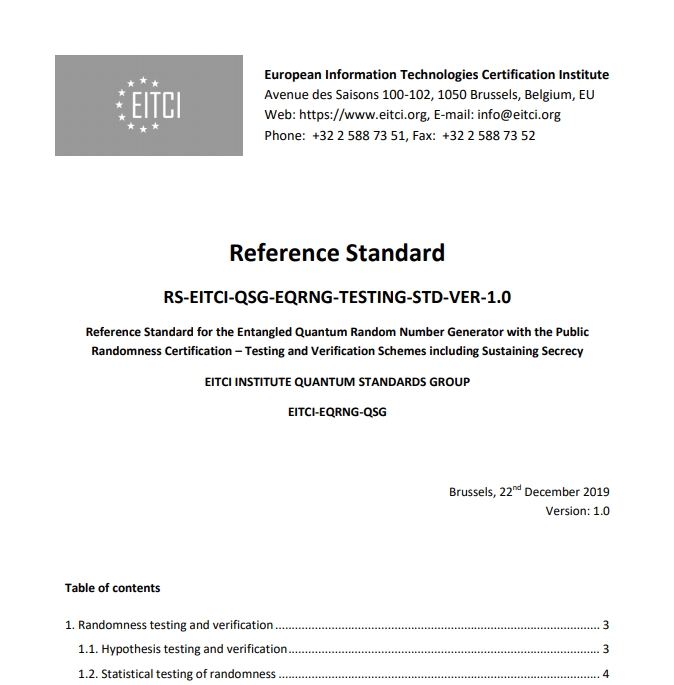 Patenting of novel hardware and protocol technical solutions is a key element of the Quantum Cryptography commercialization efforts. The R&D carried out resulted in the following two new quantum systems patents: 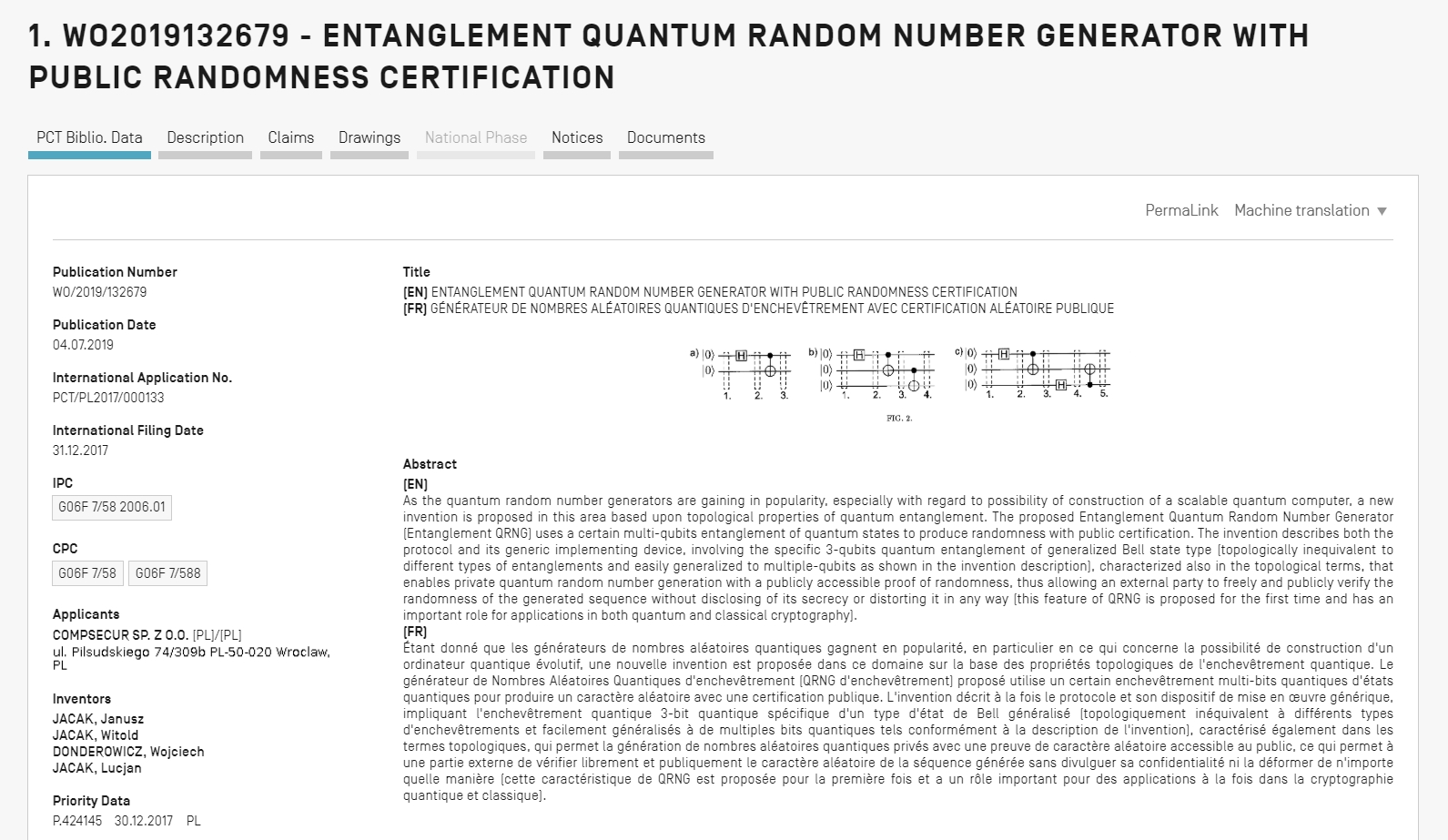 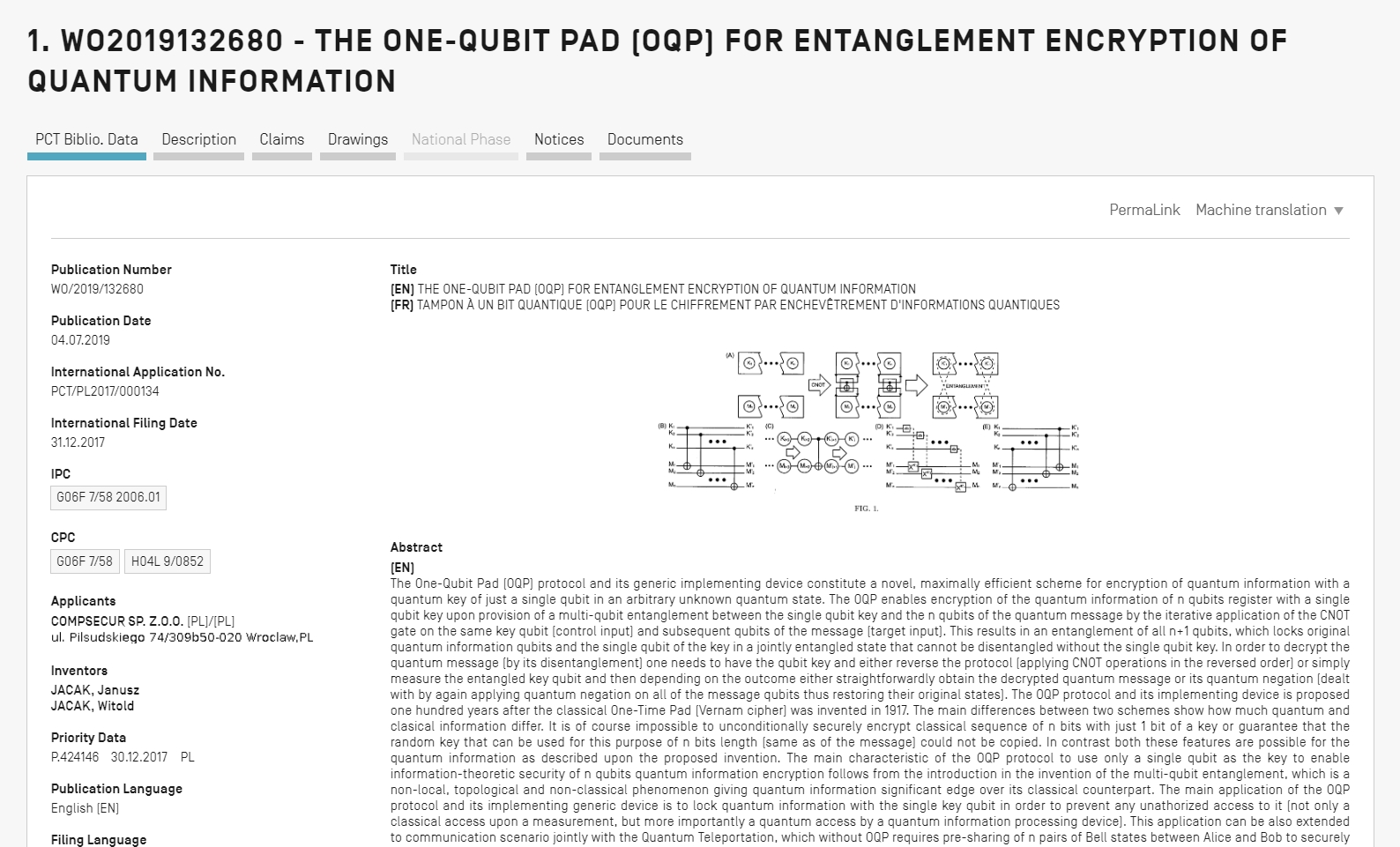 The presented below whitepapers represent the progress in the seQre Quantum Cryptography commercialization. Technological developments are concluded with the most recent paper of 2020 published in Nature Scientific Reports connected to the recent result of Google Quantum Supremacy. 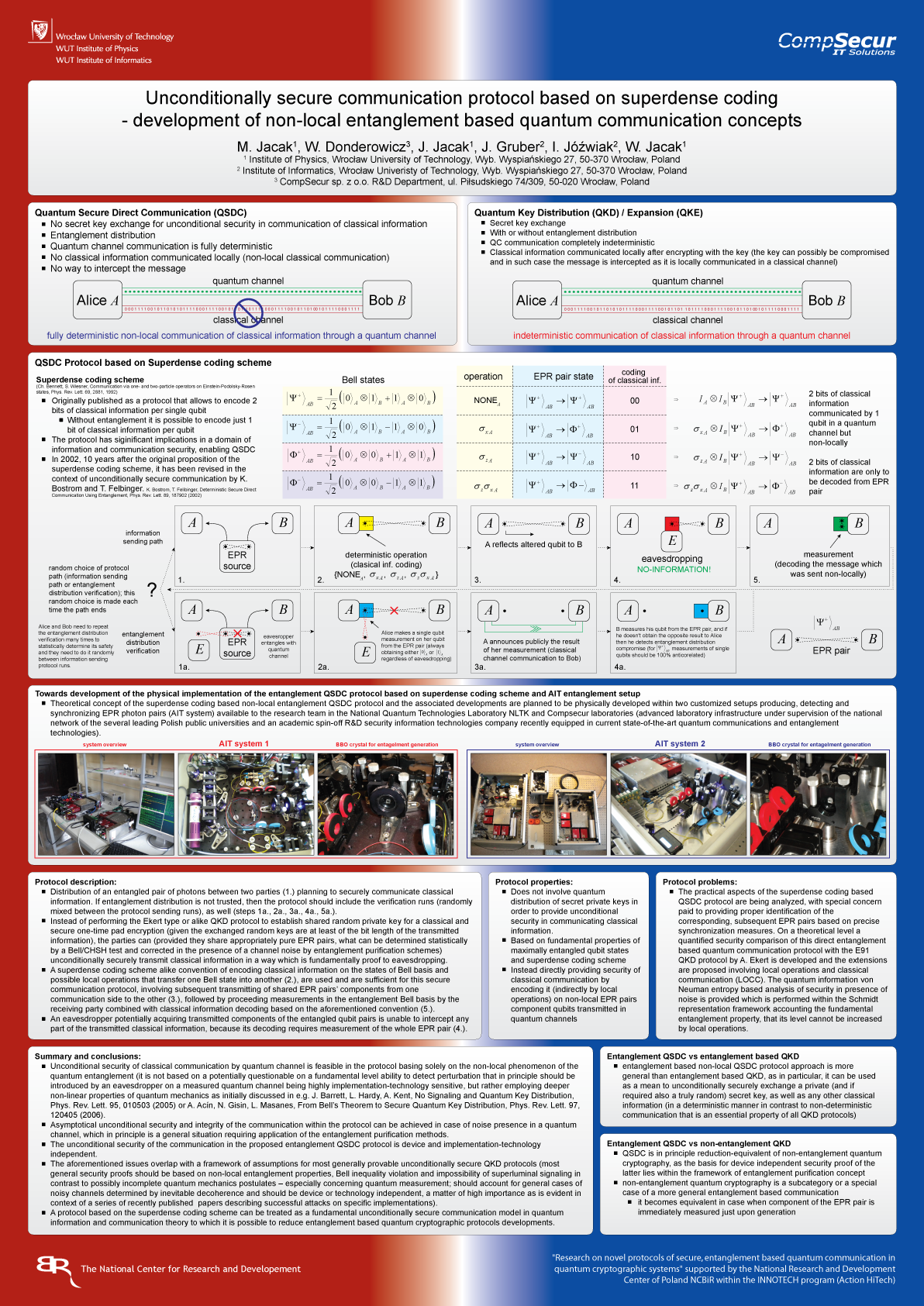 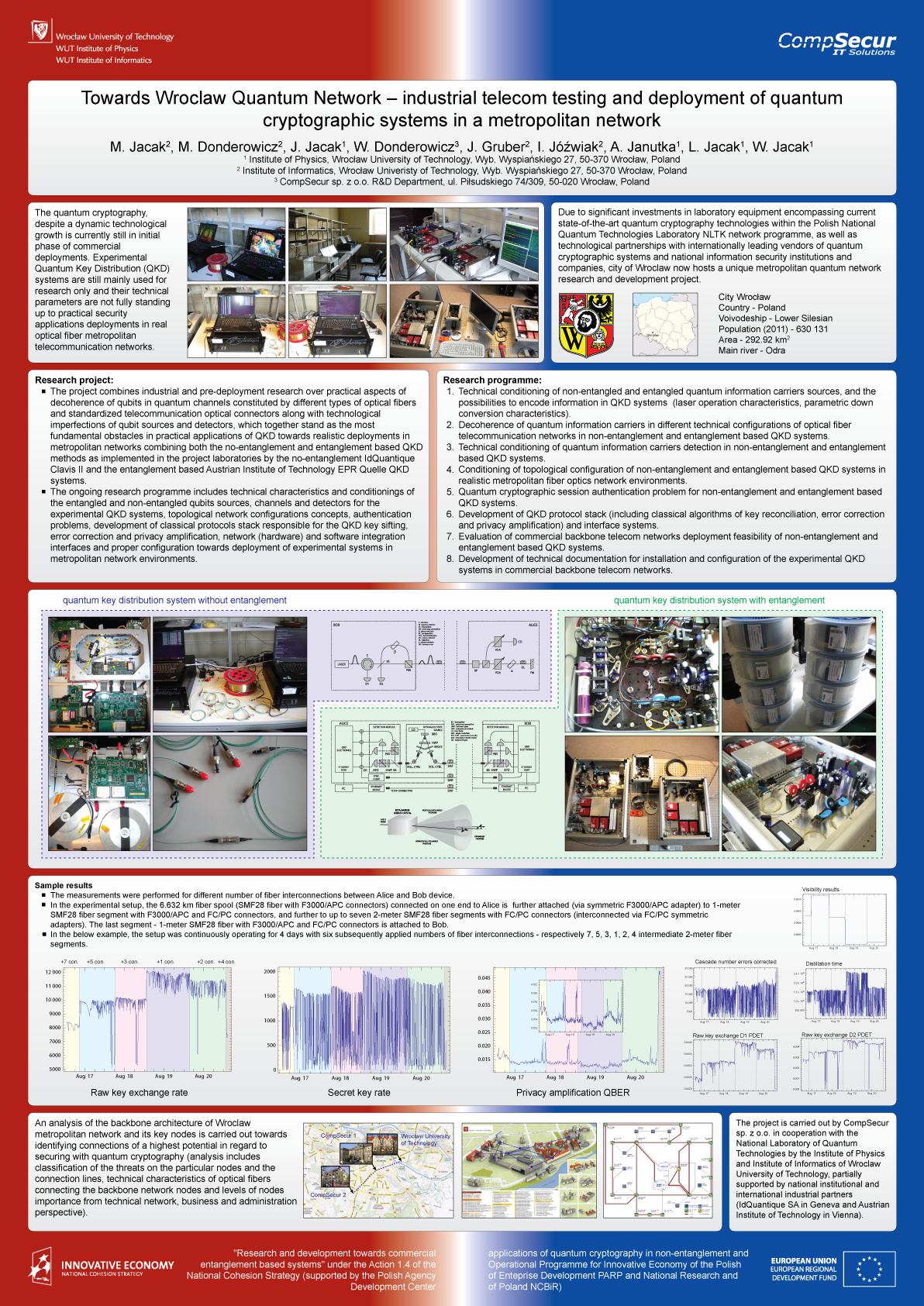 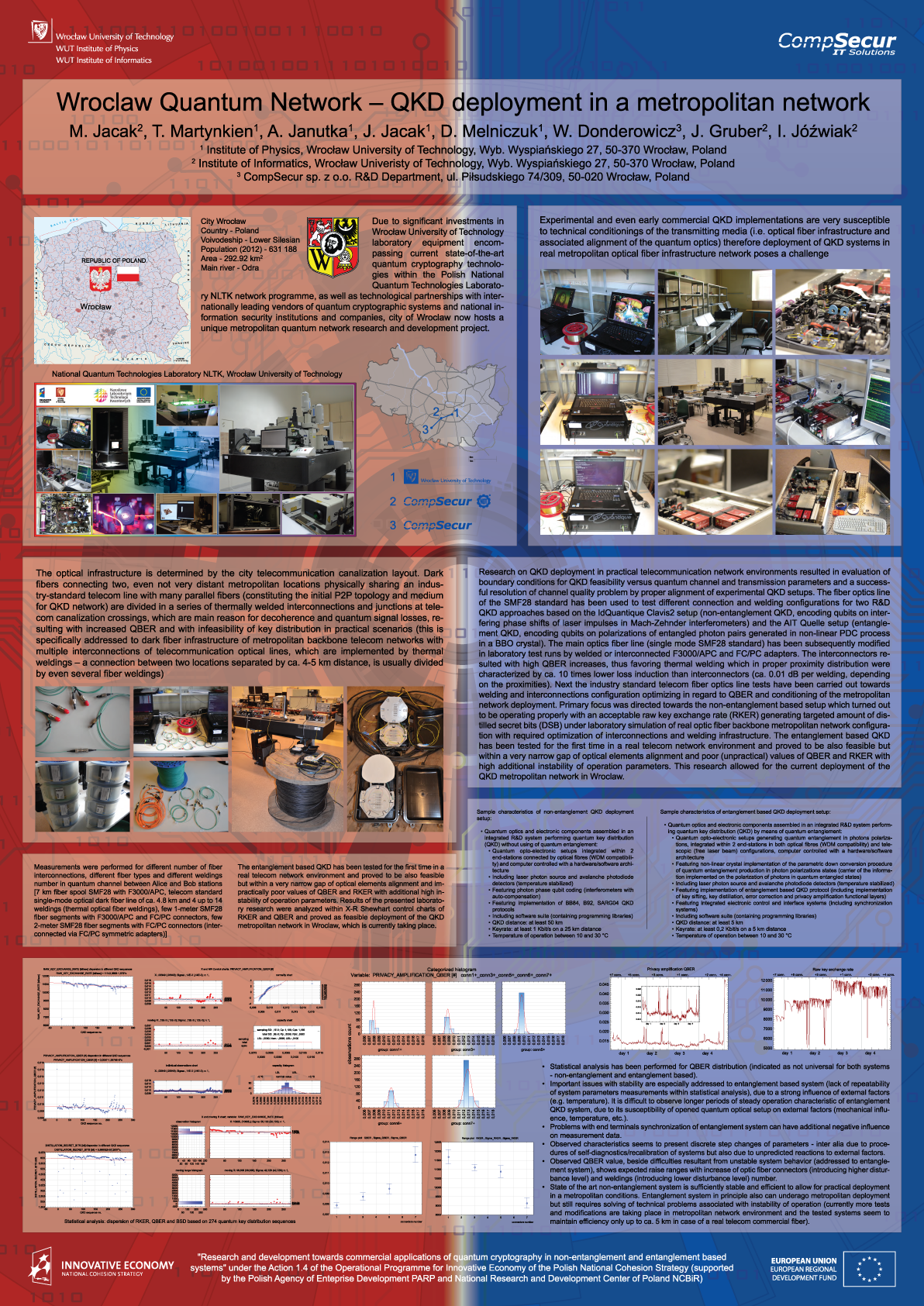 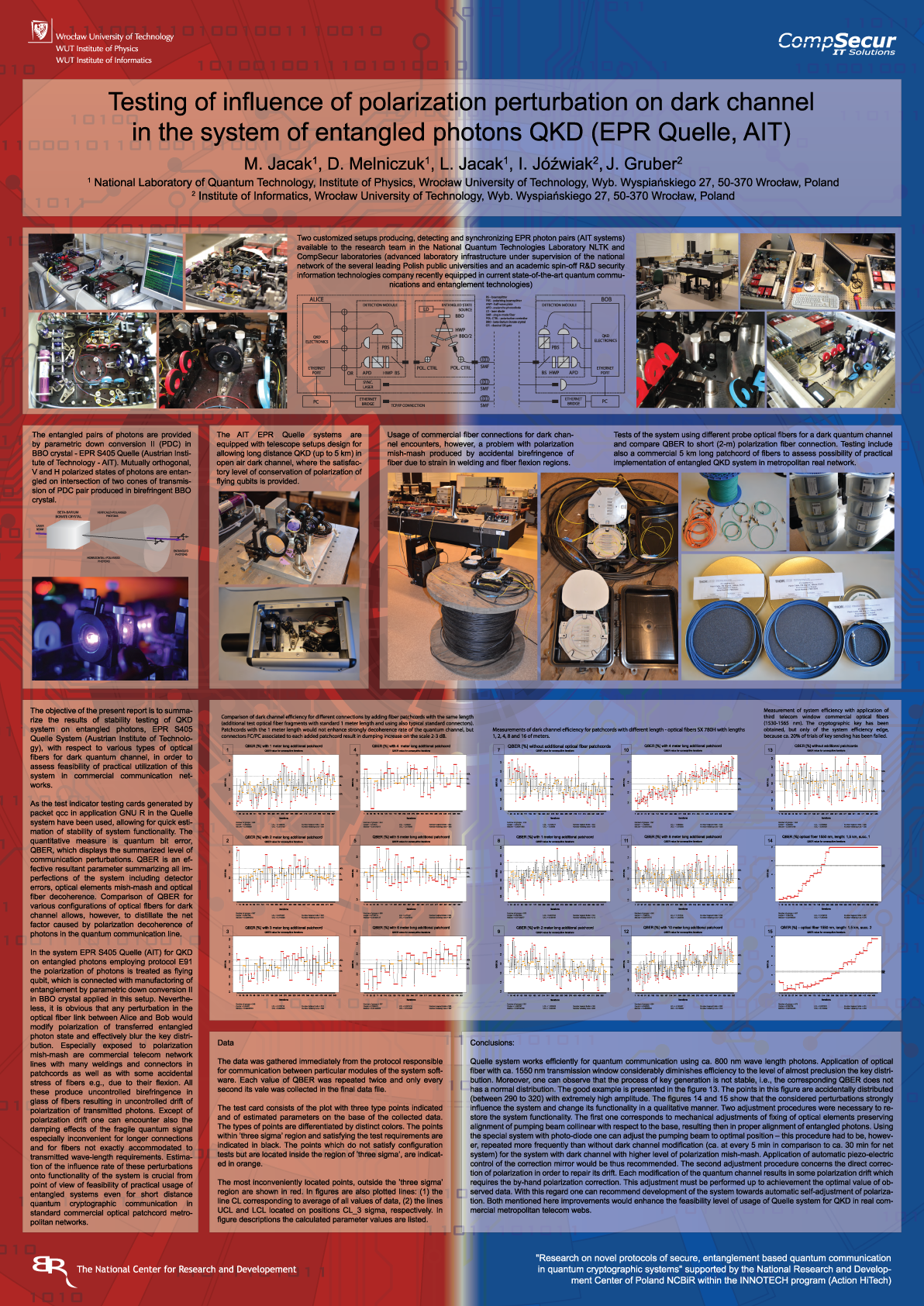 Quantum random number generators with entanglement for public randomness testing while preserving its secrecy for crypto-applications - seQre achievements in QRNG: 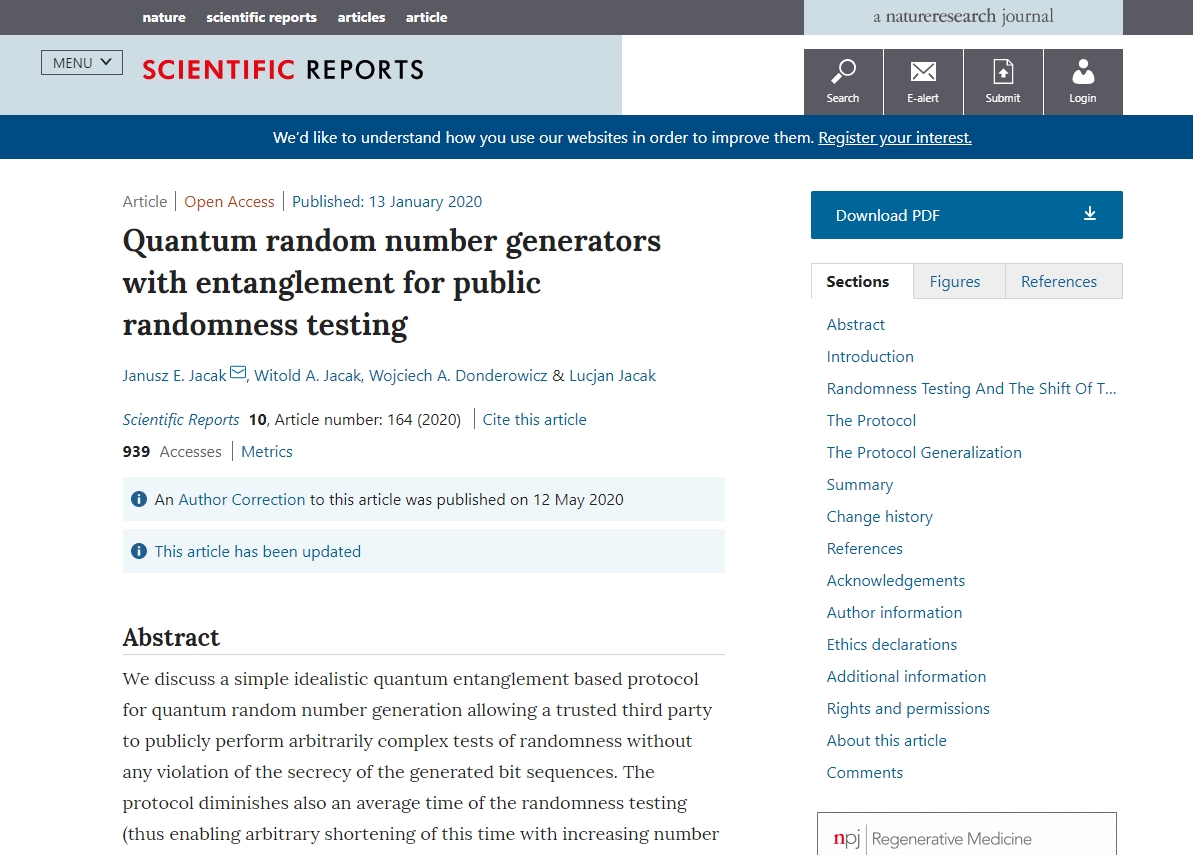 Commercialization of Quantum Cryptography (including Quantum Key Distribution systems and related Quantum Technologies) is carried out under the seQre trademark by the CompSecur sp. z o.o. company within a R&D cooperation with Wroclaw University of Science and Technology implemented since 2005

Technological developments in Quantum Cryptography include:


If you represent a company or an institution interested in deployment or other business cases for Quantum Cryptography please contact us with a Request for Proposal (RFP) or learn more about the state-of-the-art in this technology by reading further on.

The below sections specify advanced details on the corresponding above listed fields of activity in commercialization of Quantum Cryptography and related Quantum Technologies:

Upon over 15 years of R&D in quantum cryptography we commercialize the following seQre QKD systems:

Quantum optics components and electronic components integrated in the QKD system enabling the implementation of quantum key distribution without the use of quantum entanglement, enabling commercial applications and experimental research and development in the field of non-entangled quantum cryptography:

Quantum optics components and electronic components mounted in an integrated QKD system capable of performing quantum key distribution by means of quantum entanglement, which enables commercial applications and experimental research and development in the field of entangled quantum cryptography:

All systems are offered upon the preceding Request for Proposal (RFP) initially specifying deployment requirements. The costs of the deployment are proposed as dependent on the business case specification.

Annex 2 to the stage 1 project report "Support for patent procedures and protection of industrial property rights in the area of commercialization of quantum cryptography" - identification and analysis of the activity of the main quantum cryptography area representatives on the international market :

Historic outline of pilot network deployments in the field of quantum communication and related activity:

Further significant achievements were also made in the development Quantum Random Numbers Generators. A key achievement, an Entanglement QRNG protocol with public randomness verification without compromising its secrecy has been published in Scientific Reports available at https://www.nature.com/articles/s41598-019-56706-2. An important aspect of this achievement (which was first made public in December 2017 patent application) is that it specifies a quantum protocol for verifying the randomness of a binary sequence distribution. Exactly this solution, as it turned out, was a central element of Google's success from October 2019, widely recognized as a breakthrough in quantum computing achieving the state of so-called quantum supremacy by presenting the architecture and implementation of the 53-qubit Google Sycamore quantum computer capable of performing tasks unattainable for classic computers due to computational complexity, precisely in the area of ​​randomness verification distribution of the binary string, which, as we have shown in the above mentioned publication, was the key result of our previous work filed for patenting in December 2017, i.e. about two years before the publication disclosing Google's specification.

In addition, the technical concepts developed by us during the implementation of the first stage of the project, the quantum randomization verification model were adopted by a 150+ members of the Quantum Standardization Group in the Quantum Randomness Generation Workgroup of the European Information Technologies Certification Institute as a set of three accepted technical reference standards for quantum randomness generation using entanglement, with significant connection to the architecture of the Google Sycamore quantum processor (more information at https://eitci.org/technology-certification/qsg/eqrng), The inclusion of R&D results achieved by the seQre platform were part of the European reference standards for new information and communication technologies efforts in the quantum area, supporting the Quantum Flagship initiative of the European Commission. These actions were implemented by the seQre team in cooperation with EITCI Institute under the StandICT Horizon 2020 project (more information at https://www.standict.eu).

The aforementioned achievements in the field of QRNG (especially in connection to the technological breakthrough of the so-called Google quantum supremacy), constitute an important milestone in new generation of QKD systems commercialization.

The EQRNG-QSG accepted Reference Standards based on the iterated RFC initial technical specifications drafts include:

5) Engagement in national and international initiatives in Quantum Technologies development

Report on the technology state of the art evaluation within the project "Support for patent procedures and protection of industrial property rights in the area of commercialization of quantum cryptography":

Report on the technology state of the art evaluation within the project "Support for patent procedures and protection of industrial property rights in the area of commercialization of quantum cryptography" - Appendix A - information pages of the analyzed patents:

Report on the technology state of the art evaluation within the project "Support for patent procedures and protection of industrial property rights in the area of commercialization of quantum cryptography" - Appendix B - analyzed publications:

In cooperation with EITCI Institute, CompSecur sp. z o.o. has extensively participated in development of the training and certification programmes on Quantum Cryptography and Quantum Information Technologies.

On the basis of this work the following EITC Certification Programmes has been carried out:

Projects for industrial research and development co-funded by the European funds:

We encourage you to contact us, should you have any questions or inquiries regarding deployments or cooperation.