Energy can be teleported over long distances, say physicists 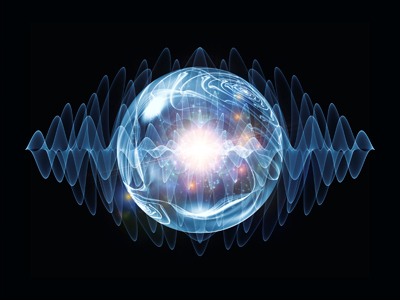 Long-distance energy teleportation may be possible

Energy could be moved over long distances by quantum teleportation, according to calculations done by a team of physicists in Japan. While energy teleportation is not a new concept, it had been thought that the amount of energy that could be sent dropped rapidly beyond short distances. The new proposal removes this shortcoming, allowing energy to be transferred much farther. The team believes that the theory could be verified in a semiconductor device and that similar energy teleportation could have occurred in the early universe.

Quantum teleportation is a remarkable idea that was first proposed by IBM's Charles Bennett and colleagues in 1992. It involves two parties, usually called Alice and Bob, who "teleport" a quantum state between each other. The scheme allows Alice to send information about an unknown quantum state to Bob, who is then able to construct a perfect copy of that state. To do so, the pair exchange classical information while sharing particles that are entangled quantum mechanically with each other. Physicists have since been able to teleport atomic states over distances of several metres and photon states over distances greater than 100 km.

While this formulation of quantum teleportation does not provide a means to exchange energy, in 2008 Masahiro Hotta of Tohoku University unveiled a theory explaining how energy could be teleported. In Hotta's formulation, Alice sends Bob the information that he needs to extract energy from the vacuum. This extraction is possible because in quantum field theory the vacuum is not devoid of energy but contains virtual particles that continually bubble-up and then vanish.

Hotta's idea arises from the fact that nearby points in the quantum vacuum are entangled. This means that if Alice and Bob are close to each other, then Alice should be able to make a measurement of her local field and use the result of her measurement to gain information about Bob's local field. If Alice then passes this information to Bob through a classical channel (for example by calling him on the telephone), Bob can use the information to devise a strategy for extracting energy from his local field. This energy will always be less than the energy Alice expended in making her initial measurement. Thermodynamically, this means that Alice can "teleport" energy to Bob in the form of the information he needs to extract energy from the quantum vacuum.

Unfortunately, the degree of entanglement between Alice's and Bob's local fields decays rapidly with distance. Indeed, the fraction of Alice's energy input that Bob can recover is inversely proportional to the sixth power of their separation. As a result, the exchange of significant amounts of energy across meaningful distances would be extremely difficult in practice.

In this latest work, Hotta and colleagues at Tohoku University propose a way round this limitation by using squeezed vacuum states. These states are identical to the vacuum state everywhere except in the region between Alice and Bob, where the energy density is much higher. The result is that entanglement can be maintained over much larger distances. Indeed, if an appropriate squeezed state is chosen, Alice and Bob's local quantum states can remain entangled across an arbitrarily large distance.

The researchers propose that such squeezed states could be generated in the laboratory by suddenly expanding the length of the edge path travelled by electrons in a quantum Hall state. The quantum Hall effect is seen in thin semiconductors – essentially 2D sheets – that are exposed to a strong magnetic field. Electrons in a quantum Hall state flow unimpeded in one direction along the edge of the semiconductor and provide a "quantum correlation channel" in which entanglement occurs. Hotta says he is currently working with team member Go Yusa to create such a system in the lab.

Hotta and colleagues also point out that squeezed states might have occurred early in the history of the universe when the cosmos underwent a brief period of rapid expansion, dubbed inflation. Quantum information expert Renato Renner of ETH Zurich is open to the idea that such a squeezed state might have been created during cosmological inflation. He is not convinced, however, that the phenomenon could be applied to the development of quantum electronic devices. He points out that energy must be expended to create squeezed states, which could make practical applications difficult to achieve.

The work is described in Physical Review A and a preprint is available on arXiv.