Entangled photons cast a new light on cause and effect 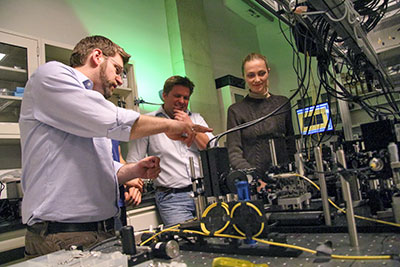 The idea that correlation does not imply causation is well known to scientists and statisticians, but now physicists in Canada have shown that it is not always the case in the weird world of quantum mechanics.

Research in medicine, economics and many other disciplines often relies on showing a statistical correlation between two variables. It is often not clear, however, whether a change in one variable actually causes a shift in the other or whether the two variables are related via a third unmeasured factor. In a drug trial, for example, a higher recovery rate among those who take a certain drug compared with those who choose not to take the drug could be related to a third factor that is linked causally to both – perhaps those who choose not to take the drug are less ill than the others. The answer is to carry out randomized drug trials, in which drugs and placebos are distributed randomly. This means that one variable – whether or not a patient chooses to take the drug – is controlled, rather than being left alone.

In the latest work, a team led by Kevin Resch of the University of Waterloo in Canada and Robert Spekkens of the Perimeter Institute for Theoretical Physics, also in Waterloo, has discovered that in quantum mechanics it is possible to find out whether or not two variables are linked causally without having to control one of the variables. Both variables can in fact be left free, with causation established purely by studying the pattern of correlations that emerge from repeated trials of the quantum system.

Spekkens and two other theorists devised a scheme in which they start by preparing two photons in an entangled state. They measure the polarization of one of these photons, called A, and then send it and its entangled partner through a gate. The photon that emerges from this gate – denoted B – is in some cases just a transformed version of A, whereas in other cases it is A's entangled partner. In the first instance, A causes B, while in the second case the two particles are related to one another by a common cause.

Crucially, these two possibilities are combined using a random-number generator, so that for a certain fraction of the time the apparatus establishes a direct causal link between A and B, whereas the rest of the time A and B are two halves of an entangled pair. In other words, the person operating the experiment doesn't know whether they are dealing with a single particle at two different times or with two entangled particles.

Resch and two of his students put this scheme into practice using polarizers, making one of three measurements on A – distinguishing horizontal from vertical polarization, diagonal from anti-diagonal polarization, or left-circular from right-circular polarization – and then carrying out exactly the same measurement on B. They repeated this process thousands of times to build up reliable statistics, with around a third of the runs dedicated to each measurement type.

The researchers established that if A causes B then the result of the polarization measurement at B may either match that at A for all three kinds of polarizers or match it for just one kind. Conversely, if A and B have a common cause, then B's result will either match A's for two of the three polarizers or match it for none of them (i.e. measured polarizations will always be different). These correlations were seen in the distribution of results from thousands of runs, with the exact form of that distribution dependent on the "bias" that the researchers chose to apply to the random-number generator – in other words, just how likely the generator was on any given run to emit a transformed version of A rather than spit out A's entangled partner.

In this way, the team was able to establish a pattern of correlations that could in future be used to identify the unknown bias of a black-box experiment. Their results bear some similarity to those obtained in unpublished work carried out in 2013 by a team led by Vlatko Vedral of the National University of Singapore and Oxford University. Vedral's group had discovered correlations that imply a direct causal link between quantum states – in their case, between nuclear spins. What Resch and colleagues have done is to find a set of correlations that can prove either the existence of a causal link or that of common causality. "We found out about the earlier work when we were halfway through writing our paper," says Katja Ried at the University of Waterloo. "But our work is more general. It is more symmetrical."

Caslav Brukner of the University of Vienna and the Institute of Quantum Optics and Quantum Information in Austria praises the "important and interesting" work, and raises the intriguing prospect that correlations could exist in a superposition of being both causally related and correlated through a common cause. He explains that such superpositions would be analogous to those of position or momentum in quantum mechanics. "If such structures exist in nature," he says, "the new research might turn out to be useful to detect them."

The researchers say that their work could help to better understand the extent to which quantum uncertainty is a feature of the real world, as opposed to a limitation in our knowledge of the world. They also believe their results could prove useful in testing components for quantum computers, by helping to distinguish between a component's input causing its output and a source of external interference acting on both.

The research is published in Nature Physics.