A team of quantum engineers in Germany have created the first air-to-surface quantum network, between a base station and an airplane flying 20 kilometers (12.4 miles) above. This is all that is needed for governments to create quantum-secured battlefield or surveillance networks — and a very tantalizing step towards a global quantum communications network.

The researchers, led by Sebastian Nauerth of the Ludwig Maximilian University, performed the experiment at an airport near Munich using a specially-equipped plane. The airplane is outfitted with a a photon source (a laser), and a system that can alter the spin (polarization) of the photons very exactly to encode data using the BB84 protocol. BB84 is the first protocol devised for quantum key distribution (created way back in 1984 by Charles Bennett and Gilles Brassard), for the purpose of quantum cryptography. In essence, BB84 encodes digital bits as polarized photons (i.e. qubits). 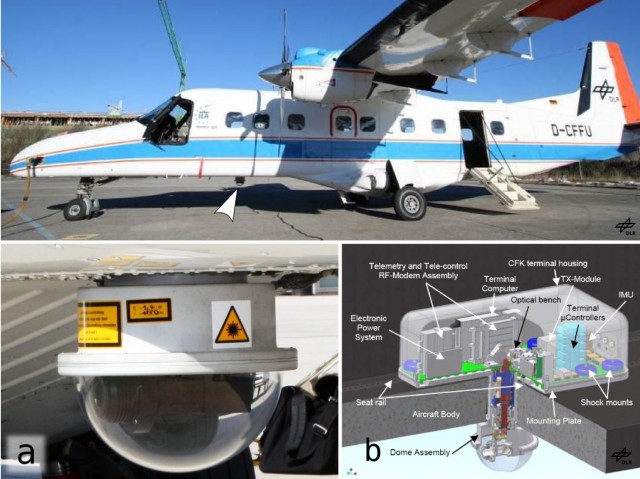 Once the plane is aloft, the base station (a telescope) tracks the plane using a motorized mirror, which is quite difficult as the plane is moving at 300 kmh (200 mph) and is 20 kilometers up in the air. The telescope picks up the transmitted photons, bounces them through a few more mirrors (the green path in the image below), and then uses a very sensitive photodetector to turn them into qubits.

All told, the plane/base station were able to maintain a stable link for 10 minutes, transmitting 145 qubits per second, with a quantum bit error rate (QBER) of 4.8%. This might seem like a small amount of data, but it’s more than enough to securely transmit an encryption key that can then be used to encrypt normal data that’s sent over standard networks. Key exchange has always been one of cryptography’s biggest weaknesses — but quantum key exchange is intrinsically secure, as observing the qubits during transmission instantly nullifies the data (and alerts the receiver that someone is listening in).

Interestingly, the experiment was performed just after sunset, to minimize the interference of sunlight. While the research paper [PDF], presented at the QCrypt convention last week, doesn’t explicitly mention if this technique would work during daylight hours, it would probably just be a matter of using a more powerful laser.

We should also point out that this approach — using photon polarization — is very different from quantum teleportation, which we reported on last week. Quantum teleportation relies on entangled photons, which are quite finicky beasts; polarized photon qubits, on the other hand, as this new experiment shows, aren’t quite so hard to handle.

Moving forward, there is the exciting prospect that this method of quantum key distribution could actually be used today by military drones, which fly at similar altitudes. You can imagine a plane that hovers over a battlefield, providing soldiers with unbreakable communications. It shouldn’t be too long until qubits can be bounced off satellites and everyone can enjoy quantum-secured communications, though.