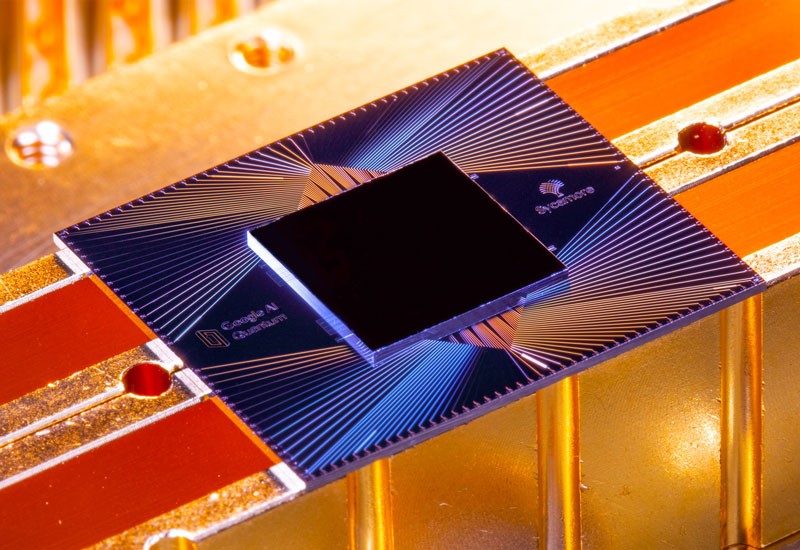 The Sycamore chip is composed of 54 qubits, each made of superconducting loops. Credit: Erik Lucero

Scientists at Google say that they have achieved quantum supremacy, a long-awaited milestone in quantum computing. The announcement, published in Nature on 23 October, follows a leak of an early version of the paper five weeks ago, which Google did not comment on at the time.

In a world first, a team led by John Martinis, an experimental physicist at the University of California, Santa Barbara, and Google in Mountain View, California, says that its quantum computer carried out a specific calculation that is beyond the practical capabilities of regular, ‘classical’ machines1. The same calculation would take even the best classical supercomputer 10,000 years to complete, Google estimates.

Quantum supremacy has long been seen as a milestone because it proves that quantum computers can outperform classical computers, says Martinis. Although the advantage has now been proved only for a very specific case, it shows physicists that quantum mechanics works as expected when harnessed in a complex problem.

“It looks like Google has given us the first experimental evidence that quantum speed-up is achievable in a real-world system,” says Michelle Simmons, a quantum physicist at the University of New South Wales in Sydney, Australia.

Martinis likens the experiment to a 'Hello World' programme, which tests a new system by instructing it to display that phrase; it's not especially useful in itself, but it tells Google that the quantum hardware and software are working correctly, he says.

The feat was first reported in September by the Financial Times and other outlets, after an early version of the paper was leaked on the website of NASA, which collaborates with Google on quantum computing, before being quickly taken down. At that time, the company did not confirm that it had written the paper, nor would it comment on the stories.

Although the calculation Google chose — checking the outputs from a quantum random-number generator — has limited practical applications, “the scientific achievement is huge, assuming it stands, and I’m guessing it will”, says Scott Aaronson, a theoretical computer scientist at the University of Texas at Austin.

Researchers outside Google are already trying to improve on the classical algorithms used to tackle the problem, in hopes of bringing down the firm's 10,000-year estimate. IBM, a rival to Google in building the world’s best quantum computers, reported in a preprint on 21 October that the problem could be solved in just 2.5 days using a different classical technique2. That paper has not been peer reviewed. If IBM is correct, it would reduce Google’s feat to demonstrating a quantum ‘advantage’ — doing a calculation much faster than a classical computer, but not something that is beyond its reach. This would still be a significant landmark, says Simmons. “As far as I’m aware, that’s the first time that’s been demonstrated, so that’s definitely a big result.”