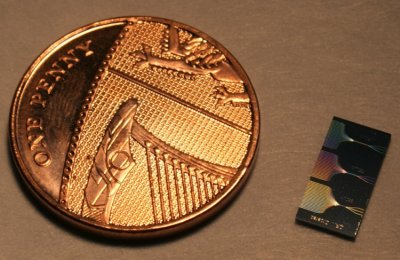 A new optical chip that allows pairs of photons to take a quantum walk has been unveiled by an international team of physicists. The tiny device contains an array of 21 coupled optical waveguides and could provide greater insight into quantum interference. Further in the future, the technology could find use in quantum computers.

A quantum walk is a variation of the familiar classical random walk – but involving quantum particles such as photons, electrons or atoms. A particle entering a beam splitter, for example, has a 50% chance of either veering right or left. If it is a classical particle it would unambiguously take one of the two paths. A quantum particle however, is placed in a superposition of both paths until a measurement is made. If each of the two paths leads to two more beam splitters, then the particle is in a superposition of four paths and so on.

If the particle paths are all very close together, the superpositions will overlap each other and the resulting interference will have an effect on the eventual position of the quantum particle.

Such quantum walks could be used in quantum-computing search algorithms. In principle these could solve certain problems in N1/2 steps – whereas a classical computer would require N steps. However, maintaining the quantum nature of the particle as it makes a large number of steps remains a significant experimental challenge.

Now, Jeremy O’Brien and colleagues at the UK’s Bristol University, Tohuku University in Japan, the Weizmann Institute in Israel and Twente University in the Netherlands have demonstrated quantum walks of two identical photons in an array of 21 parallel waveguides each about 700 µm long.

Individual waveguides are separated by about 2.8 µm, which means that light can leak between paths – putting a single photon into a superposition of two paths. And crucially, the waveguides are close enough together to allow quantum interference between different superposition states.

A key challenge in making the chip, according to O’Brien, was how to get the light into and out of the waveguides – which are so close together that they cannot be fitted with photon detectors or optical fibres.

How to bend light?

To make a connection, individual waveguides must be fanned out to a separation of at least 125 µm (see image). The bends must be very gentle to ensure that the light is reflected from the waveguide walls rather than escaping into them. Indeed, conventional waveguides (silicon dioxide cores clad in silicon) would have to be several metres long in order to separate the paths by 125 µm – not very useful for making tiny chips.

The team got around this problem by making its waveguides from silicon oxynitride. The result is a much higher refractive index contrast between core and cladding, which allows more severe bends and a device that is only a few millimetres long.

To test the device, the team injected pairs of identical photons into two adjacent waveguides and then watched to see from which waveguides the pairs would emerge. Two photons were used because the quantum walk of one photon is indistinguishable from the outcome expected if light is treated as a classical wave.

When two identical photons enter the array at the same time, quantum interference requires that the photons cannot take certain paths. The result is the characteristic pattern of a quantum walk seen by O’Brien and colleagues. The team then suppressed the quantum interference by introducing a suitable delay between the two photons. In this case the researchers saw the pattern expected from the classical interference of light.

The team now plans to look at quantum walks with three or more photons. "Each time we add a photon, the complexity of the problem we are able to solve increases exponentially, so if a one-photon quantum walk has 10 outcomes, a two-photon system can give 100 outcomes and a three-photon system 1000 solutions and so on," explained O’Brien.