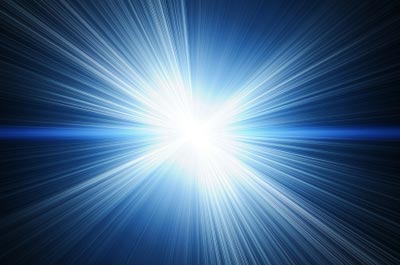 The brighter the better

Pulses of light comprising around 100,000 entangled photons have been created by physicists in Germany and Russia. The pulses were made in the "squeezed-vacuum" state and the team found that the entanglement should become stronger as the number of photons in the pulse increases. Such pulses could find use in technologies such as quantum cryptography or metrology.

Entanglement is a quantum effect that allows particles such as photons to have a much closer relationship than predicted by classical physics. For instance, two photons can be created experimentally, such that if one is measured to be polarized in the vertical direction, a measurement on the other will reveal the same polarization. This occurs in spite of the fact that a measurement on a single photon will reveal a random value of polarization. While such a correlation can occur in the non-quantum world, quantum mechanics strengthens it to beyond what is expected from classical physics. This misfit between the quantum and classical worlds was described succinctly by the Northern Irish physicist John Bell in 1964 and was confirmed by a series of experiments done in the 1970s and 1980s.

Now Maria Chekhova and colleges at the Max Planck Institute for the Science of Light and Moscow State University have created quantum states containing as many as 100,000 photons, which are all entangled with each other.

The team's experiment begins by firing a laser pulse at a polarizing beam splitter, which creates two pulses with different polarizations. These are fired at two nonlinear crystals and "pump" the crystals. Thanks to the nonlinear nature of the crystals, a photon in a pump pulse can decay into a pair of entangled photons with the same polarization – but with different energies (A and B). One photon is infrared and the other is in the visible range of the electromagnetic spectrum.

The initial decay in the crystal will occur spontaneously and as the first photon pair travels through the crystal it will stimulate the emission of other photon pairs. The ensuing cascade will produce a pulse of photons that are all entangled in what is called a "squeezed-vacuum" state. The pulse is squeezed because the numbers of photons in pulses A and B are more precisely correlated than in two typical laser pulses of equal energy. The vacuum part of the definition comes from the fact that the pulse began spontaneously with zero photons – the vacuum state.

The total number of photons in each pulse is counted by the detectors and the degree to which a pulse is entangled can be determined by determining the correlations between signals in the two detectors. The team was not able to test the entanglement using Bell's inequality because the standard Bell's inequality is only valid for photon pairs and is not applicable in this case. The derivation of a macroscopic Bell's inequality still remains a challenge. However, the team was able to establish entanglement using the "separability condition" that applies to such systems. The analysis revealed that the pulses had a greater degree of correlation than allowed by classical physics and were therefore entangled.

The researchers also calculated a parameter of the pulse called the "Schmidt number", which is a measure of the degree of entanglement within the pulses. They found that the number scales as the average number of photons in the pulse. According to the team, this means that brighter pulses are more entangled than their weaker counterparts.

Xiao-Qi Zhou of the UK's University of Bristol described the set-up as "a very clever method to detect entanglement in such large photonic state". He adds, "People knew that a big [squeezed-vacuum] state is entangled but didn't know how to prove it experimentally."
Zhou believes that the most promising application of the entangled pulse is "practical quantum metrology". Examples include phase microscopy and optical gyroscopes.

Chekhova says that the pulses could also be used for quantum key distribution (QKD), which uses entanglement to allow two parties to exchange coded information in secret. "Quantum information can be encoded into the photon number, and then beams A and B would be distributed to the two users," she explains. "This protocol would be similar to the well known Ekert [QKD] protocol, based on photon pairs, but here the alphabet will be larger," she adds.

The research is reported in Physical Review Letters.