Quantum communication in the back of a pick-up 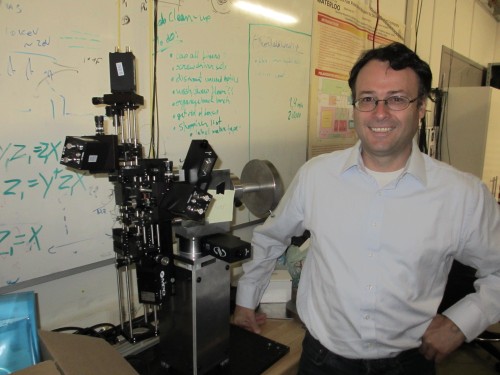 Thomas Jennewein and his quantum receiver will soon hit the streets of Waterloo.

I’m back from my trip to Waterloo, Ontario – Canada’s "Quantum Valley" – but there is still so much to tell. The photograph above is of Thomas Jennewein of the Institute for Quantum Computing (IQC), who took me on a tour of his lab earlier this week.

Jennewein is standing next to a quantum receiver that he and his colleagues will soon be bolting to a pick-up truck and driving around Waterloo. The plan is to receive quantum communications from a light source that’s on the roof of one of IQC’s buildings. The ultimate goal of the research is to deploy quantum receivers (and transmitters) in space to create a global quantum-communication network.

If you want to know more about the worldwide effort to put quantum-communication equipment on satellites, Jennewein and his IQC colleague Brendon Higgins wrote about that very topic in the March 2013 issue of Physics World. That issue focuses on "Quantum frontiers" and you can download a free PDF. 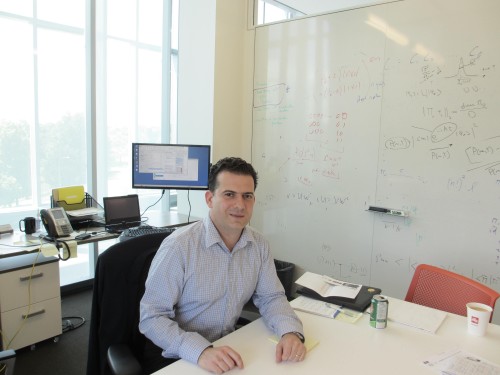 Although much more work must be done before quantum computers will be available for cracking codes, Mosca (above) – who co-founded IQC – told me that there is currently no reason to be pessimistic about the development of quantum computers. Because the required technologies are being developed at a fairly rapid pace, he believes it’s time to start building a compiler for a quantum computer.

Today it’s very difficult to connect up more than a handful of quantum bits (qubits) to make a quantum processor. Therefore Mosca believes that it’s very important to create compilers that make quantum-computing algorithms run as efficiently as possible on real systems.

If you would like to have an idea of the myriad quantum algorithms available today, Leung recommends the Quantum Algorithm Zoo.