A small firm based in Canada that aims to build a commercially viable quantum computer has shown that an important part of its technology works. D-Wave Systems, which was spun-out of the University of British Columbia in 1999, has shown that a technique called quantum annealing can be used to make eight coupled quantum bits – or qubits – find their ground state. According to the firm’s chief technology officer Geordie Rose, the announcement is the first of several scientific results that D-Wave will be unveiling – including one that he claims is "mind blowing".

Based in Vancouver, D-Wave was set up with the aim of creating a quantum computer that uses loops of superconducting wire as qubits. As the electrical current circulating within such a "flux qubit" is quantized, the two lowest states (i.e. electrons travelling clockwise and anticlockwise) can be assigned data values of "0" or "1". The magnetic field associated with the currents is also quantized – pointing up and down for currents moving in opposite directions – and can be flipped using an external magnetic field.

Quantum computers could outperform a classical computer at some tasks – at least in principle – thanks to two key quantum properties. These are that a qubit can be in a superposition of two or more quantum states and that two or more qubits can be entangled. But the big challenge for D-Wave – and for everyone else trying to build a quantum computer – is how to create qubits and computing processes that are resistant to the destructive effects of heat and noise.

Using flux qubits is attractive in that quest because they are macroscopic structures that can be created using semiconductor-manufacturing processes and can be controlled using applied currents and voltages. A downside is that they have a multitude of quantum states, not just two. The task for D-Wave is how to place each qubit in a well-defined and useful quantum state without it being corrupted by heat or noise – essentially the analogue of writing data to a classical computer.

The method chosen by the firm to do this is called "quantum annealing" – and now D-Wave has shown that it can use this technique to place eight coupled qubits into the appropriate lowest energy state. The researchers began with eight superconducting flux qubits within one of D-Wave’s integrated circuits. These contain 128 flux qubits arranged into 16 units of eight. The system is then cooled to a temperature of 10 mK, which puts each qubit into a superposition of two quantum states with identical energy, i.e. current circulating anticlockwise (spin-up) and clockwise (spin-down).

This superposition is not, however, particularly useful and the next step is to manipulate each qubit into a pure spin-up or spin-down state. Each loop is broken by a structure containing two Josephson junctions and a magnetic coil. When a current is applied to the coil, an energy barrier rises between the spin-up and spin-down states. In a classical system, the loop would be forced into either the up or down state and could hop between states by absorbing heat from the surroundings. A qubit however, remains in a superposition of up and down as long as the barrier rises slowly enough.

Each qubit has a second magnetic coil, which is used to "tip" the qubit into the desired pure state. If the field is applied in the up direction, for example, the energy of the spin-up state drops below that of the spin-down state, thereby making it more likely that the qubit will become pure spin-up. The problem facing D-Wave is that this transition occurs both by quantum-mechanical tunnelling and by absorbing heat (thermal excitation). Thermal excitation destroys the quantum nature of the qubit, and so must be avoided during quantum annealing.

The two processes can be distinguished by raising the barrier until both tunnelling and heat-driven transitions stop (the qubit "freezes") – and then repeating this process at different temperatures. The research team found that below about 45 mK, freezing is affected primarily by barrier height and not temperature, which is what is expected if annealing occurs by tunnelling alone.

The team then showed that it could anneal a unit of eight qubits. The researchers did this by adjusting the interactions between the qubits to simulate a 1D chain of magnets in which each qubit wants to point in the same direction as its two neighbours. The qubit at the right-hand end of the chain is set in the up direction and the qubit at the left-hand end in the down direction. The six qubits in the middle are then allowed to orient their spins according to that of their neighbours. The result is a "frustrated" ferromagnetic arrangement in which two neighbours must have opposing spins.

Finally, the qubits are all tilted in the same direction while the barrier is raised. This should result in the system moving towards one specific arrangement of frustrated spins – the ground state. Again, below about 45 mK, the system found its way to the ground state in a manner consistent with the spins flipping because of quantum-mechanical tunnelling, not thermal activation. "We're very excited to see the remarkable agreement between what quantum mechanics predicts and what we see in these circuits," says D-Wave’s Mark Johnson, who was lead scientist on the project.

Finding the ground state of an eight-spin system is a simple quantum calculation and therefore the D-Wave team has shown that its combination of hardware and annealing process is capable of the job.

"This is the first time that the D-Wave system has been shown to exhibit quantum mechanical behaviour," says William Oliver of the Massachusetts Institute of Technology, who was not involved in the research. Oliver told physicsworld.com that when combined with D-Wave’s ability to control precisely important parameters of the qubits, this latest work is "a technical achievement and an important first step". 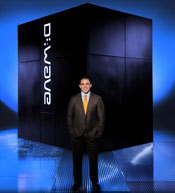 Looking beyond quantum computing, David Feder of the University of Calgary also sees the system as an effective quantum simulation of how electron spins interact in magnetic materials. "This work describes a nice approach to simulating the (ferromagnetic or antiferromagnetic) quantum Ising model, and this is interesting in its own right," explains Feder. "I think that there is a lot of promise in the D-Wave architecture for simulating frustrated magnetic systems, and maybe more general strongly correlated systems, and this will benefit everyone. So, to me, it is a good step in the right direction."

D-Wave currently employs about 60 scientists and engineers, of whom about 20 work on developing algorithms and 40 work on building hardware, according to Rose. This latest research was carried out by 25 of D-Wave’s employees along with researchers at the University of Agder in Norway and Simon Fraser University in Canada.

"This is the first time we’ve been able to open up the black box and show how [D-Wave’s devices] are harnessing quantum mechanics in solving problems," says Rose. He told physicsworld.com that the firm now plans to do similar quantum-annealing experiments involving much larger numbers of qubits. He also says that the researchers will apply the process to "real problems" such as machine learning and artificial technology. Rose is adamant that D-Wave’s systems could be used in commercial settings as well as for doing basic research in quantum computing. "Our sales team is out selling at the moment," he says.

According to Rose, the company will soon publish a number of journal papers about its research. However, he was unable to provide more details because the work is currently being peer-reviewed.