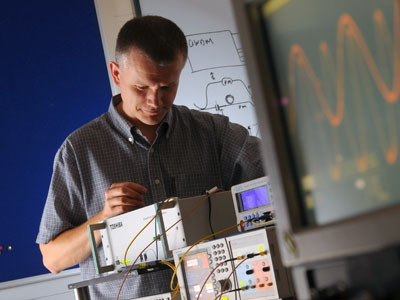 Quantum cryptography is the most secure method of communication available – but it is also expensive, because each pair of users requires its own set of specialized equipment. That could soon change, however, now that physicists working at Toshiba have developed technology to allow up to 64 users to share the same transmission line.

In conventional cryptography one person, Alice, wants to send another person, Bob, an encrypted message. To do so she first sends him a "key" so that the message can be decrypted. But transmitting the key is a security hazard: an eavesdropper, Eve, could easily intercept it, read it and send it on, without Alice and Bob’s ever noticing.

Quantum mechanics offers a way round this problem, because of the way that measurements can indelibly alter quantum states. Suppose that part of the quantum key that Alice sends Bob is a photon polarized in the vertical direction. Bob receives the photon and measures it in one of two orientations, or "bases": vertical–horizontal as Alice sent it, or diagonal–antidiagonal. If he chooses the vertical–horizontal base, he will measure the photon’s polarization correctly but if he chooses the diagonal–antidiagonal base then he will, in fact, measure either a diagonal or an antidiagonal polarization. The photon’s original vertical polarization will have been twisted – but no matter: afterwards, Alice can let Bob know which base she used to send the photon, so that Bob can keep only the measurements that did not give a twisted outcome.

This technique is a type of quantum key distribution (QKD) and it is totally secure. If Eve tries to intercept and measure one of the photons, she will sometimes pick the wrong base to measure it in, and end up twisting its polarization. When Bob then tries to measure in the correct base, the photon’s polarization will be twisted again – introducing an error rate that Alice and Bob can easily detect.

Unfortunately, quantum cryptography is expensive. In current incarnations, each Alice-and-Bob pair requires its own dedicated, point-to-point fibre-optic transmission line – and a highly specialized single-photon detector. As a result, the scheme is currently thought to be employed only by banks, government agencies and other high-profile users.

One Bob, many Alices

Now, physicists working for Toshiba in Cambridge, UK, and Kawasaki, Japan, have demonstrated a new technology that could make quantum cryptography much more widely accessible – according to Andrew Shields, one of its developers at Toshiba Research Europe. The idea is to make the scheme similar to the way regular telecommunications works, with several transmission lines fanning out over great distances from one central location – which would be one "Bob". At the other end, each of these high-capacity lines would branch out to multiple "Alices" in a local network.

Such a scheme requires that quantum keys from several Alices are combined into a single fibre. This is not a problem in itself but the single-photon detectors at Bob’s end, which consists of so-called avalanche photodiodes (APDs), must distinguish between such frequently arriving signals. Normal APDs struggle to detect photons arriving within 10 µs of one another, because they must wait for the photon-generated charge to decay to avoid false counts.

Shields and colleagues have now designed APDs that generate much smaller electron currents, so that less decay time is required before the detector resets. The researchers’ new APD detector can detect a photon every nanosecond – enough to allow up to 64 Alices to share quantum keys with the one central Bob. In addition, the researchers have moved timing and polarization adjusters from the receiver to the transmitters, to compensate for irregularities in the signal propagation through the fibre.

Closer to everyday use

Quantum physicist Alexander Sergienko at Boston University in the US agrees that the new system brings quantum cryptography closer to everyday use by regular telecommunications customers. The new system "offers multiple users a possibility to share same hi-tech hardware," he says. "This reduces a costly technology overhead for some ordinary customers, thus expanding the quantum communication coverage in the future beyond governments and big banks."

The research is published online today in Nature 501 69.