Quantum data are compressed for the first time 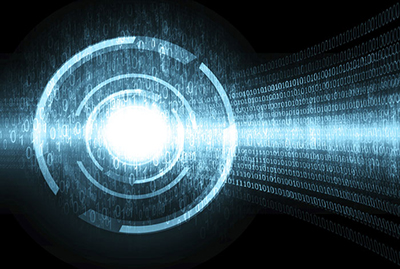 A quantum analogue of data compression has been demonstrated for the first time in the lab. Physicists working in Canada and Japan have squeezed quantum information contained in three quantum bits (qubits) into two qubits. The technique could pave the way for a more effective use of quantum memories and offers a new method of testing quantum logic devices.

Compression of classical data is a simple procedure that allows a string of information to take up less space in a computer's memory. Given an unadulterated string of, for example, 1000 binary values, a computer could simply record the frequency of the 1s and 0s, which might require just a dozen or so binary values. Recording the information about the order of those 1s and 0s would require a slightly longer string, but it would probably still be shorter than the original sequence.

Quantum data are rather different, and it is not possible to simply determine the frequencies of 1s and 0s in a string of quantum information. The problem comes down to the peculiar nature of qubits, which, unlike classical bits, can be a 1, a 0 or some "superposition" of both values. A user can indeed perform a measurement to record the "one-ness" of a qubit, but such a measurement would destroy any information about that qubit's "zero-ness". What is more, if a user then measures a second qubit prepared in an identical way, he or she might find a different value for its "one-ness" – because qubits do not specify unique values but only the probability of measurement outcomes. This latter trait would seem to preclude the possibility of compressing even identical qubits, because there is no way of predicting what classical values they will ultimately manifest as.

In 2010 physicists Martin Plesch and Vladimír Bužek of the Slovak Academy of Sciences in Bratislava realized that, while it is not possible to compress quantum data to the same extent as classical data, some compression can be achieved. As long as the quantum nature of a string of identically prepared qubits is preserved, they said, it should be possible to feed them through a circuit that records only their probabilistic natures. Such a recording would require exponentially fewer qubits, and would allow a user to easily store the quantum information in a quantum memory, which is currently a limited resource. Then at some later time, the user could decide what type of measurement to perform on the data.

Now, Steinberg and his colleagues have demonstrated working quantum compression for the first time with photon qubits. Because photon qubits are currently very difficult to process in quantum logic gates, Steinberg's group resorted to a technique known as measurement-based quantum computing, in which the outcomes of a logic gate are "built in" to qubits that are prepared and entangled at the same source. The details are complex, but the researchers managed to transfer the probabilistic nature of three qubits into two qubits.

Plesch says that this is the first time that compression of quantum data has been realized, and believes Steinberg and colleagues have come up with a "nice trick" to make it work. "This approach is, however, hard to scale to a larger number of qubits," Plesch adds. "Having said that, I consider the presented work as a very nice proof-of-concept for the future."

Steinberg thinks that larger-scale quantum compression might be possible with different types of qubits, such as trapped ions, which have so far proved easier to manage in large ensembles. A practical use for the process would be in testing quantum devices using a process known as quantum tomography, in which many identically prepared qubits are sent through a quantum device to check that it is functioning properly. With quantum compression, says Steinberg, one could perform the tomography experiment and then decide later what aspect of the device you wanted to test.

But in the meantime, says Steinberg, the demonstration provides another perspective on the strangeness of the quantum world. "If you had a book filled just with ones, you could simply tell your friend that it's a book filled with ones," he says. "But quantum mechanically, that's already not true. Even if I gave you a billion identically prepared photons, you could get different information from each one. To describe their states completely would require infinite classical information."

The research will be described in Physical Review Letters.