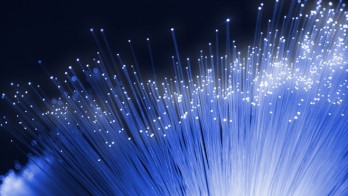 Toshiba Research and Cambridge University in England are reporting that they have succeeded in building the first conventional fiber-optic network that’s capable of transmitting and receiving both quantum data (for encryption) and normal high-speed binary data. This breakthrough means that the world’s fiber networks can now be secured with theoretically unbreakable encryption.

The basic concept behind quantum cryptography is that Alice sends a crypto key to Bob via a stream of single photons (quantum key distribution, QKD). If a man-in-the-middle attacker somehow manages to intercept the photons, this interrupts the transmission in such a way that can be detected. In theory, quantum crypto should result in totally secure communications. (In reality, there are other attack vectors that bypass the inherent security provided by the photons.)

Now, quantum-secured networks aren’t particularly new, but until now the single photons (qubits) have required their own dedicated optical fiber for transmission. In conventional fiber-optic networks, the transmission of data is very intense, with over 1 million photons carrying a single bit of binary data. Sending single photons down the same fiber simply wasn’t feasible; it was impossible to extract that single photon at the other end. Until now! 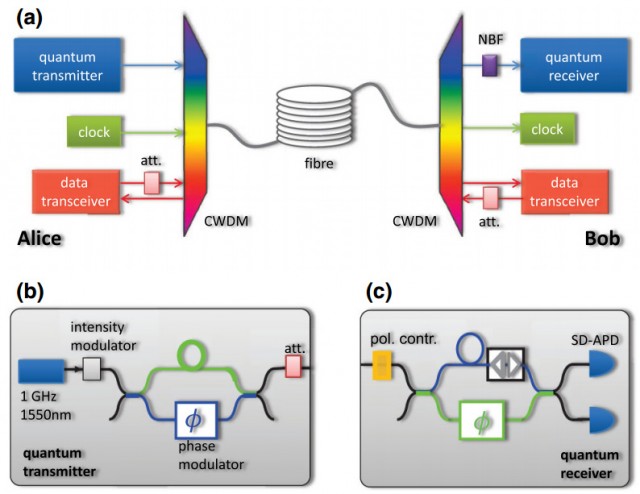 The Toshiba and Cambridge researchers have overcome this restriction by transmitting the quantum photons and data signals at different wavelengths, and by using a special photodetector at the receiving end that turns on for just 100 millionth of a microsecond (a few hundred femtoseconds). The different wavelengths mean that the signals don’t clash, and the photodetector only turns on when it expects to receive a single photon.

The end result is a fiber network that can transmit binary data at 1Gbps in both directions, and perform quantum key distribution at 500Kbps at the same time, over a 90km (56mi) length. This is apparently 50,000 times faster than the previous best QKD over a fiber network of this length. In theory, this means that the next generation of fiber networks — assuming this femtosecond photodetector can be implemented commercially — could be secured with quantum cryptography. Most importantly, we’re only talking about new routers — this method of QKD could be performed on existing (and very expensive) fiber networks.

The immediate benefit will be for military and police/security networks, and domestic infrastructure (think secure communications in smart cities). With fiber steadily rolling out to consumers, though, you and I might soon be downloading torrents and watching cat videos that have been encrypted with quantum cryptography.

Check out popular story on the secret world of submarine fiber-optic cables.