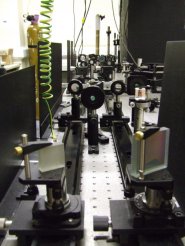 Some physicists believe that quantum computers of the future will be built from large numbers of quantum dots — tiny pieces of semiconductor, each containing an electron (or hole) in a certain quantum spin state. However, such quantum states are easily destroyed by interference from external noise, and physicists have yet to create quantum dots — or any other system — that are robust enough to be used in a practical quantum computer.

Now, physicists in the UK and Brazil have taken an important step towards the creation of quantum dots with sufficiently robust spin states (Phys. Rev. Lett. 100 197401). Andrew Ramsay of the University of Sheffield and colleagues have shown that they can control the "trion" state (two holes plus one electron) of a single quantum dot using ultrashort laser pulses. The technique allows for a large number (up to 105) of logic operations to be performed before the quantum state is destroyed.

Quantum computers will work on the principle that a quantum particle can be in two states at the same time — "spin up" or "spin down" in the case of an electron or hole (a hole is left behind when an electron is excited to higher energy levels within a material). The two spin states represent a logical "1" or a "0", so N such particles — or quantum bits (qubits) — could be combined or "entangled" to represent 2N values simultaneously. This would lead to the parallel processing of information on a massive scale not possible with conventional computers.

Semiconductor quantum dots are nanoscale structures in which electrons or holes are confined in all three directions. The dots can contain just one electron or hole each and are promising for use as qubits since information can be stored in the spin state of a single electron or hole. The quantum dot spins also have the potential to be very stable — they could have extremely long "coherence" times of micro- to milliseconds. The challenge, however, is how to control and connect the quantum dots without reducing their stability.

The team’s quantum dot is a disk of the semiconductor indium-gallium-arsenide, measuring 20 nm in diameter and 3 nm thick and embedded in a photodiode structure. The team shone a laser on the device, which creates an electron-hole pair in the dot. An electric field is applied across the structure, which causes the electron to tunnel from the dot, which leaves the hole in a well-defined spin state. Later, the hole also tunnels from the dot and is detected as a photocurrent.

A circularly-polarized laser pulse then measures the spin state of the hole by trying to create a trion (by creating an additional electron hole pair). If the laser is right circularly polarized, a trion only forms if the initial hole is "spin-down", for example. This is because the Pauli exclusion principle prevents the two holes from being in the same quantum state. The creation of a trion can be detected as a change in the photocurrent, which is proportional to a particular spin state of the hole, explained Ramsay.

"This is a new tool for studying the dynamics of a single spin on sub-nanosecond timescales," he told physicsworld.com. "It will be essential for evaluating the performance of picosecond single qubit manipulations."

In the short term, Ramsay believes that the technique will provide a "tool-box" for studying the optical control of a single spin, and to explore schemes for creating high-fidelity quantum logic gates for quantum computing. "Our next goal is to observe coherent spin precession of the hole spin in a magnetic field," he revealed. "We then intend to pursue full coherent optical control of a single spin."