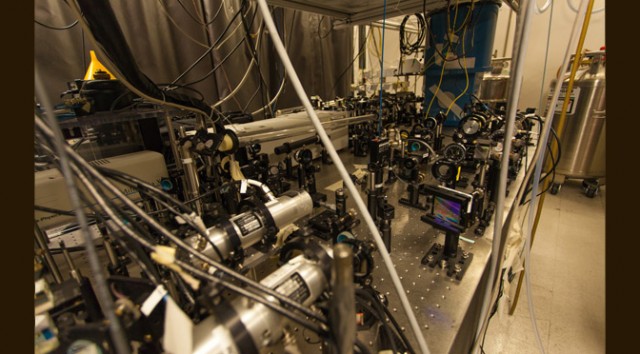 Researchers at Stanford University have taken another major step toward using quantum entanglement for communication, streamlining the process by which two particles can be forced into an entangled state. Once entangled, each should react to changes in the other’s quantum spin — if one switches from up-spin to down-spin, the other should hypothetically do the same, instantly and regardless of the distance between them. The study demonstrates a technique in which each particle is induced to emit a photon entangled to its parent. By funneling these photons down a fiber optic cable so that they collide somewhere in the middle, the system can force the two parents (still held at their respective sources) to become entangled to one other. While the pipe dream of a latency-free internet is enticing enough, a much more immediate application could be the next generation of data encryption.

In cryptography, there is a classic thought experiment: How can I secure a message such that only the intended recipient (you) can read it, without ever having to compromise security by sending you the key? The traditional solution has been to send the message twice — I lock the message in a box and send it to you; you lock it again and send the box back; I use my key to remove my own lock; and when you receive the message the second time you have only your own lock left to remove. The problem with this approach is that while it’s easy to remove padlocks out of order, there is only one known way of similarly undoing complex mathematical operations without garbling the information they protect. As a result, electronic cryptography has remained static for years now. PGP and similar encryption standards are still theoretically unbreakable but, perhaps understandably, national and even personal security agencies are becoming increasingly paranoid that it will break any day now. Or perhaps it already has.

As a result, quantum cryptography is receiving increasing attention in and out of the defense contracting universe. As we’ve explained before, quantum entanglement provides a hypothetical framework for transmission of information without any possibility of intersception. 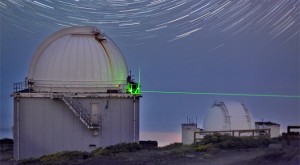 This means that we could fearlessly send an unencrypted message via quantum communicator, but the finite nature of entangled particles mean that we will likely need to be extremely conservative about how much information we transmit — which brings us back to our thought experiment. In the quantum future, I could send a highly encrypted message over conventional channels, unbreakable by both you and the eavesdropper, then send you the key via our mutually entangled bundles of particles. This minimizes the amount of information sent via entanglement, while completely negating the problem of key transmission. According to quantum theory, interception of our key is quite simply impossible.

The Stanford study used a quantum dot array; a stamp-sized semiconductor with millions of electrons held immobile on its surface. This German innovation provides a handy source of photons, and is designed to give rise to precisely the right frequency of photon for transmission along fiber optic cable. It’s all very tidy, though still years away from practical application. You can be sure that military agencies around the world have long ago taken notice of this technology, however, and that they are actively performing similar experiments of their own.

The first military to acquire invulnerable data transmission, instant and without the need for satellites to bounce the signal around the Earth, will enjoy a decisive advantage in virtually every sector. The implications for civilian life are much more difficult to predict.