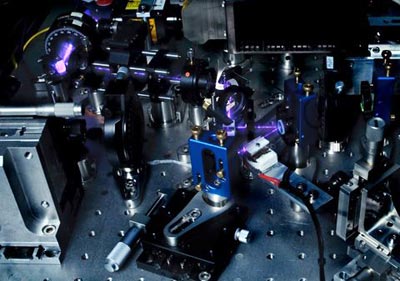 The third and final loophole in an important test of the quantum nature of the photon has been closed by an international team of physicists. The researchers have shut what is called the "fair sampling" loophole, which says that classical – rather than quantum – effects could be responsible for measured correlations between entangled pairs of photons. The photon is now the first system in which the violation of "Bell's inequality" has been unambiguously established. While few physicists will be surprised that all three loopholes have now been closed, doing so could be an important step towards developing failsafe quantum cryptography.

The loophole-closure experiment has been carried out by Anton Zeilinger, Marissa Giustina and colleagues at the University of Vienna, the Austrian Academy of Sciences, the Max Planck Institute of Quantum Optics and the German and US national standards labs (PTB and NIST). It involved two observers, dubbed Alice and Bob, and a source that created pairs of photons that are entangled in terms of their polarization – a quantum-mechanical concept that results in a correlation between the polarizations that is much stronger than allowed by classical physics.

What this means is that if Alice measures the polarization of a succession of photons, she obtains a random result. But while Bob's measurements also appear random, his results are correlated when compared on a photon-by-photon basis. In other words, when Alice's photon is vertically polarized, for example, Bob's is much more likely to have the same polarization.

In 1964 the Northern Irish physicist John Bell famously calculated an upper limit on how strong these correlations could be if they were caused by classical physics alone – what has become known as Bell's inequality. Correlations stronger than this limit, he reasoned, could only occur if the photons were entangled as defined by quantum mechanics. But while many experiments have confirmed that Bell's inequality is indeed violated, these experiments – which use photon, ions and other entangled particles – are plagued by loopholes. A sceptic could therefore argue that the violation occurs because of some unforeseen effect of classical physics, rather than being a quantum effect.

There are three main loopholes. The first is the "locality loophole", whereby information about the measurements can somehow be exchanged between Alice and Bob's detectors. The second is the "freedom-of-choice" loophole, whereby the source of the entangled particles can somehow communicate classically with the detectors and affect how the measurements are made.

Both loopholes were closed simultaneously for photons in an experiment done in 2010 by a team led by Zeilinger after the researchers transmitted the photons distances of up to 144 km between two of the Canary Islands. That work meant that any clandestine communications between detectors and the source were impossible because it would have to happen at speeds faster than that of light.

As for the third major challenge to Bell's violation – the so-called "fair-sampling" loophole – it argues that a classical explanation is possible if the experiment detects only some of the photon pairs, rather than measuring every one of them. If this process somehow favoured correlated pairs over uncorrelated pairs, an apparent violation would be measured. This loophole was closed over a decade ago for entangled pairs of ions, but it is extremely difficult to detect each and every photon in an experiment.

Fortunately, about 20 years ago Philippe Eberhard of the Lawrence Berkeley Laboratory in the US created a new type of inequality that takes undetected events into account. This interpretation requires that only 67% of all entangled photons be measured. But even to achieve this lower threshold, the team had to make significant improvements to the equipment used to create and detect entangled photons. The pairs were made using "spontaneous parametric down-conversion", whereby a higher energy photon is fired into a special crystal to produce a pair of lower-energy polarization-entangled photons.

These pairs are separated using an optical system and directed at two separate photon detectors that play the role of Alice and Bob. To ensure that the detection efficiency is very high the team used superconducting transition-edge sensors (TESs) to detect the light. When a photon is absorbed by a TES the extra energy heats the superconductor so that it reverts to its normal state. This is characterized by a large increase in its electrical resistance, which can be detected.

The team carried out a series of experiments each lasting about five minutes and involving about 24 million entangled pairs, which were captured with a detection rate of 75%. The data revealed a staggering 69? violation of Eberhard's inequality – effectively shutting the door on the fair-sampling loophole.

There is one catch, however. To ensure that more than 67% of the pairs were detected, the experiment was done in the lab with Alice, Bob and the source near to each other. As a result, this particular experiment did not simultaneously rule out the other two loopholes. According to Giustina, closing all three in a Canary Islands experiment would be extremely difficult.

While this latest experiment is unlikely to change how most physicists think of quantum mechanics – most have no doubts regarding entanglement and other quantum effects – the ability to create systems in which all three loopholes can be closed could have important implications for the development of quantum cryptography. This is because cryptography relies on entanglement and therefore a loophole in a system could be exploited by quantum hackers.