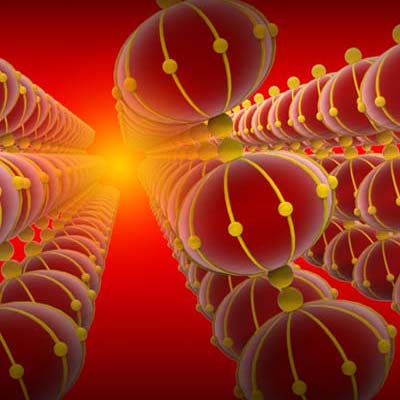 An international team of physicists is the first to implement in the lab an important "error correction" technique that could play a vital role in the development of practical quantum computers. Known as topological error correction (TEC), the technique is based on "clusters" that each contain eight highly entangled photons. These clusters are useful for this purpose because a measurement on one photon does not destroy the entire entangled state.

The multiparticle cluster state at the centre of the current work was first proposed in 2001 by Robert Raussendorf and Hans Briegel, who were then at the University of Munich. Now at the University of British Columbia in Canada, Raussendorf is also involved in this latest research. Such a cluster could be used to perform "one-way" quantum computing, in which the states of individual particles are measured in a specific sequence so that the quantum state of the remaining particles gives the result of the computation.

Although quantum computers promise a lot, anyone wishing to build a practical device has to deal with the tricky fact that the quantum nature of qubits fizzles away rapidly as they interact with the heat and noise of the surrounding environment. Quantum error correction offers a way of staving off this "decoherence" – at least long enough for a quantum computation process to occur – by distributing the quantum information held in one "logical" qubit among a number of entangled "physical" qubits. Subjecting these physical qubits to an error-correction algorithm can then reveal if one or more qubits has undergone decoherence and, if so, to restore quantum information.

Developed by Jian-Wei Pan and colleagues at the University of Science and Technology of China in Shanghai, along with Raussendorf and other physicists in Canada and Australia, the new experimental demonstration of TEC involves defining qubits in terms of fundamental shapes that cannot be changed by continuous deformations. A doughnut, for example, remains a doughnut if it is poked, stretched or prodded – unless the perturbation is so violent that it cuts the loop. Topological qubits are similar in the sense that they are not easily perturbed by noise and heat, and must take a big hit before they are destroyed.

The team's cluster state comprises eight entangled photons, each acting as a physical qubit that can have a value of "0" and "1" depending upon its polarization state. The state is made by creating four pairs of entangled photons from firing a laser pulse at a non-linear crystal. The pairs are separated and combined in new pairs that are entangled by having them interfere on polarization-dependent beamsplitters.

The photons can be thought of as forming a 3D cube, in which each photon is entangled with its nearest neighbours. This arrangement has a certain topology that protects a specific quantum correlation between two physical qubits – something that could be used as a building block to create logical qubits in a topological quantum computer.

The TEC is implemented on the cluster state by making a series of measurements on the photons – essentially performing a one-way quantum-computing algorithm. To test the correction scheme, the team purposely introduced errors into the system. First, the researchers caused decoherence in one specific qubit and found that the TEC algorithm could identify which photon was affected and correct the error. Next, the team introduced a fixed amount of decoherence to all photons simultaneously, and again the scheme was able to identify the problem and correct it.

"Our experiment provides a proof of principle that topological error correction would be one of the most practical approaches for designing quantum computers," Pan told physicsworld.com.

Pan points out that TEC offers several benefits when compared with conventional schemes – in particular, it can handle the highest error rates of any scheme, making it easier to use with real physical devices, which will always suffer from errors. "Moreover, the architecture used in topological error correction is rather simple: it is sufficient to create interactions between two quantum bits that neighbour each other," he adds. This means that TEC should be compatible with a range of different qubit schemes, including quantum dots and Josephson junctions. This is important because such solid-state qubits should be easier to integrate and scale up to create a practical quantum computer.

Raymond Laflamme, director of the Institute for Quantum Computing at the University of Waterloo in Canada, says that the work is an important result that shows that TEC can be implemented in principle. But given that not all types of qubits are compatible with TEC, Laflamme cautions that its future usefulness will depend on which qubit technologies are ultimately used to create practical quantum computers.

The next step in the team's research is to create cluster states involving larger numbers of qubits – to do TEC on a logical qubit rather than just a correlation. Ultimately, physicists would like to develop systems that implement TEC on topological qubits and topological quantum-logic gates.

The work is described in Nature.