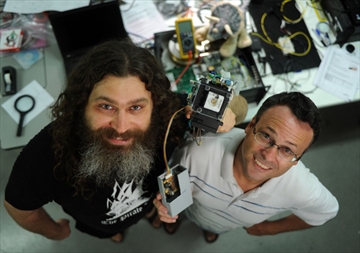 WATERLOO — Up among the clouds in the Canary Islands, researchers have pulled off a teleportation experiment that opens the door to a satellite network for powerful quantum computers that could change our world as we know it.

In something that sounds straight out of a science fiction movie, the scientists worked only at night, battling dust storms and shooting green beams of light from one mountain top to another — successfully teleporting quantum information a record 143 kilometres.

And they did it with the help of three researchers from the University of Waterloo’s Institute for Quantum Computing and their highly specialized equipment and computer algorithms.

Vadim Makarov, Thomas Jennewein and Elena Anisimova teamed up with a group from Vienna’s Institute for Quantum Optics and Quantum Information to pull off the groundbreaking experiment that was years in the making.

The group’s research, published this week in the journal Nature, is a major step in the field of quantum physics, which studies the strange behavior of nature at the molecular level.

This isn’t the teleportation of people or objects popularized by Star Trek, but rather photons, or light particles. The researchers hope it’s a key step toward quantum teleportation between earth and satellites, a major hurdle in developing an internet of quantum computers.

Teleportation over 143 kilometres is a crucial milestone in the field, since it’s almost the minimum distance between the ground and orbiting satellites.

"It’s been a huge technical achievement," said Jennewein, who is also working to develop a quantum satellite with the Canadian Space Agency. "It’s not so long ago in the history of quantum physics that this only existed in the lab."

The experiment, conducted over several weeks last April, was challenging for the logistics alone. After getting their strange-looking equipment past suspicious customs inspectors, the researchers worked every night — daytime had too much light pollution — inside two space observatories high up on the islands of La Palma and Tenerife.

"The customs of the Canary Islands were getting really alarmed. ‘What is this?’ It looked like a big morgue box, with locks on it," said Makarov, laughing.

They had until sunrise each morning to align their equipment and run their tests, all part of an incredibly sensitive operation that was once only possible in a controlled laboratory setting. The actual photons being teleported were invisible to the eye, so they shot a bright green tracking beam to align signals.

Shipping hassles, bad weather and "noise" from man-made lights all threw up obstacles for the researchers, too. Scientists have spent years trying to develop quantum computers that would revolutionize information processing, making processors working at the atomic level that are many times faster than classical computers.

Using the tools of mathematics, they’ve developed a way to encrypt data in particles of light, which can be transmitted over long distances. The strange laws of quantum physics mean those transmissions are impossible to intercept, because they would appear completely random to any eavesdropper.

"In the future, we want to connect quantum computers on a global scale to make a quantum internet. We want to have secure communication over long distances," Makarov said.

To non-physicists, the science behind the quantum teleportation experiment may be mind-bending. The researchers used ultra-precise "clocks" that needed to be aligned to one another within one billionth of a second.

Even with that kind of precision, the data being beamed between the two observatories constantly drifted out of alignment, and the equipment needed to be readjusted.

And the photons they teleported weren’t actually moved at all — instead, their information was recreated in photons 143 kilometres away. In others words, identical photons were in both places at once.

Makarov, head of the IQC’s quantum hacking lab, and Anisimova, a PhD student, worked on the ultra-sensitive photon detectors that were able to filter through the haze caused by dust storms.

Designed by Makarov for another experiment, the detectors are a thousand times more precise than any other detector available commercially. Until he was contacted for this project, he thought they would never have a practical use.

Jennewein, working back in Waterloo, used Skype to troubleshoot the computer algorithms used by the Vienna researchers. He began work on the project in 2003 back in Vienna and knew it intimately.

Seeing something he’s worked on for so long finally shared with the rest of the world has been incredibly rewarding, he said.

"It’s taken a little while for it to sink in, that after all this effort, it actually worked," Jennewein said. "It’s been such a big effort, over many, many years. It’s great to see it get this kind of attention."